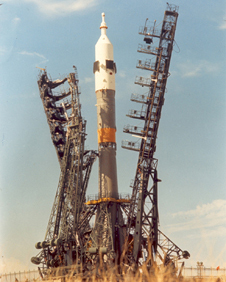 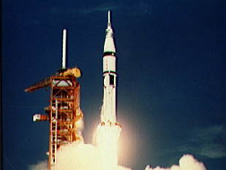 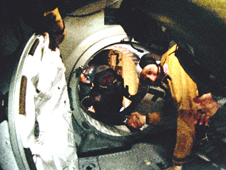 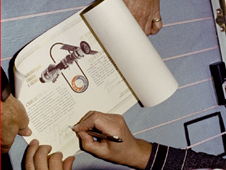 Image above: The hands of Cosmonaut Valery Kubasov are seen as he adds his name to the Soviet side of the official joint mission certificate during rendezvous day. Image credit: NASA

Both the Soyuz and Apollo vehicles made orbital adjustments during the following two days, bringing both into a circular, 229-kilometer orbit. Hard-dock was achieved July 17 at 12:12 p.m. as the two craft soared above the Atlantic Ocean. A global audience watched on television as the historic event unfolded.

Hatches between the vehicles were opened at 3:17 p.m. and the two space crews warmly greeted each other, officially beginning joint activities. The astronauts and cosmonauts took congratulatory calls from Soviet Communist Party General Secretary Leonid Brezhnev and U.S. President Gerald Ford, exchanged commemorative gifts and shared a meal before closing the hatch for the day.

The next day was a busy one for the combined crews. Brand joined Kubasov in the Soyuz, while Leonov joined Stafford and Slayton in the Apollo. After giving TV viewers a tour of each vehicle, the crew members conducted science experiments and had lunch. Later, Kubasov and Brand left the Soyuz to join Slayton in the Apollo, leaving room for Leonov and Stafford to spend time in the Soyuz.

By mid-afternoon, the final speeches and gift exchanges were complete, and it was time for the astronauts and cosmonauts to say goodbye. After the last handshake, the crews retreated to their spacecraft and the hatches between the two vehicles were closed.

The two spacecraft undocked July 19 at 8:02 a.m. As the Apollo capsule backed away, it blocked the sun from the Soyuz vehicle, creating the first human-made eclipse and enabling the cosmonauts to photograph the sun's corona. The two spacecraft then docked once more, with final undocking at 11:26 a.m.

Soyuz 19 stayed in orbit an additional day to carry out life-science experiments. Its mission ended July 21 at 6:51 a.m. with a successful landing less than seven miles from its target near Baikonur Cosmodrome. Soyuz 19 marked the first Soviet mission with a televised launch and landing.

While Soyuz touched down, Apollo still was in orbit. The astronauts spent the extra time in space by performing space-science and Earth-observing experiments. Apollo splashed down in the Pacific Ocean west of Hawaii at 5:18 p.m. EDT on July 24. It was the last planned ocean landing for U.S. human spaceflight.
Find this article at:http://www.nasa.gov/mission_pages/apollo-soyuz/astp_mission.html