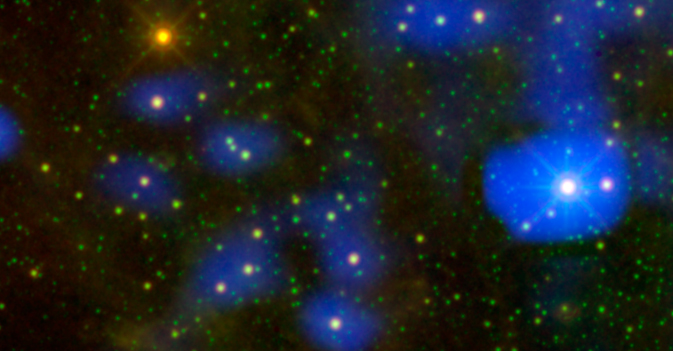 PASADENA, Calif. -- Images from NASA's Wide-field Infrared Survey Explorer (WISE) reveal an old star in the throes of a fiery outburst, spraying the cosmos with dust. The findings offer a rare, real-time look at the process by which stars like our sun seed the universe with building blocks for other stars, planets and even life.

The star, catalogued as WISE J180956.27-330500.2, was discovered in images taken during the WISE survey in 2010, the most detailed infrared survey to date of the entire celestial sky. It stood out from other objects because it glowed brightly with infrared light. When compared to images taken more than 20 years ago, astronomers found the star was 100 times brighter.

"We were not searching specifically for this phenomenon, but because WISE scanned the whole sky, we can find such unique objects," said Poshak Gandhi of the Japan Aerospace Exploration Agency (JAXA), lead author of a new paper to be published in the Astrophysical Journal Letters.

Results indicate the star recently exploded with copious amounts of fresh dust, equivalent in mass to our planet Earth. The star is heating the dust and causing it to glow with infrared light.

"Observing this period of explosive change while it is actually ongoing is very rare," said co-author Issei Yamamura of JAXA. "These dust eruptions probably occur only once every 10,000 years in the lives of old stars, and they are thought to last less than a few hundred years each time. It's the blink of an eye in cosmological terms."

The aging star is in the "red giant" phase of its life. Our own sun will expand into a red giant in about 5 billion years. When a star begins to run out of fuel, it cools and expands. As the star puffs up, it sheds layers of gas that cool and congeal into tiny dust particles. This is one of the main ways dust is recycled in our universe, making its way from older stars to newborn solar systems. The other way, in which the heaviest of elements are made, is through the deathly explosions, or supernovae, of the most massive stars.

"It's an intriguing glimpse into the cosmic recycling program," said Bill Danchi, WISE program scientist at NASA Headquarters in Washington. "Evolved stars, which this one appears to be, contribute about 50 percent of the particles that make up humans."

Astronomers know of one other star currently pumping out massive amounts of dust. Called Sakurai's Object, this star is farther along in the aging process than the one discovered recently by WISE.

After Poshak and his team discovered the unusual, dusty star with WISE, they went back to look for it in previous infrared all-sky surveys. The object was not seen at all by the Infrared Astronomical Satellite (IRAS), which flew in 1983, but shows up brightly in images taken as part of the Two Micron All-Sky Survey (2MASS) in 1998.

Poshak and his colleagues calculated the star appears to have brightened dramatically since 1983. The WISE data show the dust has continued to evolve over time, with the star now hidden behind a very thick veil. The team plans to follow up with space- and ground-based telescopes to confirm its nature and to better understand how older stars recycle dust back into the cosmos.

NASA's Jet Propulsion Laboratory, Pasadena, Calif., manages and operates WISE for NASA's Science Mission Directorate in Washington. The spacecraft was put into hibernation mode after it scanned the entire sky twice, completing its main objectives. The principal investigator for WISE, Edward Wright, is at the University of California, Los Angeles. The mission was selected competitively under NASA's Explorers Program managed by the agency's Goddard Space Flight Center in Greenbelt, Md. The science instrument was built by the Space Dynamics Laboratory in Logan, Utah. The spacecraft was built by Ball Aerospace & Technologies Corp. in Boulder, Colo. Science operations and data processing take place at the Infrared Processing and Analysis Center at the California Institute of Technology (Caltech) in Pasadena. Caltech manages JPL for NASA.