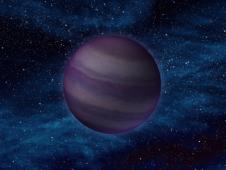 This artist's conception illustrates what a "Y dwarf" might look like. Y dwarfs are the coldest star-like bodies known, with temperatures that can be even cooler than the human body. Image credit: NASA/JPL-Caltech
› Full image and caption 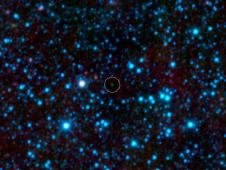 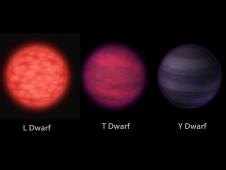 This artist's conception illustrates what brown dwarfs of different types might look like to a hypothetical interstellar traveler who has flown a spaceship to each one. Image credit: NASA/JPL-Caltech
› Full image and caption

Astronomers hunted these dark orbs, termed Y dwarfs, for more than a decade without success. When viewed with a visible-light telescope, they are nearly impossible to see. WISE's infrared vision allowed the telescope to finally spot the faint glow of six Y dwarfs relatively close to our sun, within a distance of about 40 light-years.

"WISE scanned the entire sky for these and other objects, and was able to spot their feeble light with its highly sensitive infrared vision," said Jon Morse, Astrophysics Division director at NASA Headquarters in Washington. "They are 5,000 times brighter at the longer infrared wavelengths WISE observed from space than those observable from the ground."

The Y's are the coldest members of the brown dwarf family. Brown dwarfs are sometimes referred to as "failed" stars. They are too low in mass to fuse atoms at their cores and thus don't burn with the fires that keep stars like our sun shining steadily for billions of years. Instead, these objects cool and fade with time, until what little light they do emit is at infrared wavelengths.

So far, WISE data have revealed 100 new brown dwarfs. More discoveries are expected as scientists continue to examine the enormous quantity of data from WISE. The telescope performed the most advanced survey of the sky at infrared wavelengths to date, from Jan. 2010 to Feb. 2011, scanning the entire sky about 1.5 times.

Of the 100 brown dwarfs, six are classified as cool Y's. One of the Y dwarfs, called WISE 1828+2650, is the record holder for the coldest brown dwarf, with an estimated atmospheric temperature cooler than room temperature, or less than about 80 degrees Fahrenheit (25 degrees Celsius).

"The brown dwarfs we were turning up before this discovery were more like the temperature of your oven," said Davy Kirkpatrick, a WISE science team member at the Infrared Processing and Analysis Center at the California Institute of Technology in Pasadena, Calif. "With the discovery of Y dwarfs, we've moved out of the kitchen and into the cooler parts of the house."

"Finding brown dwarfs near our sun is like discovering there's a hidden house on your block that you didn't know about," Cushing said. "It's thrilling to me to know we've got neighbors out there yet to be discovered. With WISE, we may even find a brown dwarf closer to us than our closest known star."

Once the WISE team identified brown dwarf candidates, they turned to NASA's Spitzer Space Telescope to narrow their list. To definitively confirm them, the WISE team used some of the most powerful telescopes on Earth to split apart the objects' light and look for telltale molecular signatures of water, methane and possibly ammonia. For the very coldest of the new Y dwarfs, the team used NASA's Hubble Space Telescope. The Y dwarfs were identified based on a change in these spectral features compared to other brown dwarfs, indicating they have a lower atmospheric temperature.

JPL manages WISE for NASA's Science Mission Directorate. The principal investigator is Edward Wright at UCLA. The WISE satellite was decommissioned in 2011 after completing its sky survey observations. The mission was selected under NASA's Explorers Program managed by the Goddard Space Flight Center in Greenbelt, Md. The science instrument was built by the Space Dynamics Laboratory in Logan, Utah, and the spacecraft by Ball Aerospace & Technologies Corp., in Boulder, Colo. Science operations and data processing are at the Infrared Processing and Analysis Center at the California Institute of Technology. JPL is a division of the California Institute of Technology in Pasadena.