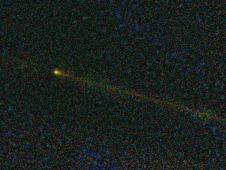 New findings from NEOWISE, the asteroid- and comet-hunting portion of NASA's Wide-field Infrared Survey Explorer mission, show that comet Hartley 2 leaves a pebbly trail as it laps the sun, dotted with grains as big as golf balls.

Previously, NASA's EPOXI mission, which flew by the comet on Nov. 4, 2010, found golf ball- to basketball-sized fluffy ice particles streaming off comet Hartley 2. NEOWISE data show that the golf ball-sized chunks survive farther away from the comet than previously known, winding up in Hartley 2's trail of debris. The NEOWISE team determined the size of these particles by looking at how far they deviated from the trail. Larger particles are less likely to be pushed away from the trail by radiation pressure from the sun.

"We were surprised that carbon dioxide plays a significant role in comet Hartley 2's activity when it's farther away from the sun," said James Bauer, the lead author of a new paper on the result in the Astrophysical Journal. An abstract of the scientific paper is online at http://arxiv.org/abs/1107.2637, with the option of downloading a full PDF.