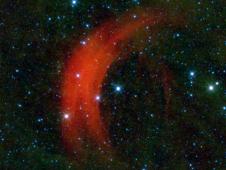 Just as some drivers obey the speed limit while others treat every road as if it were the Autobahn, some stars move through space faster than others. NASA's Wide-field Infrared Survey Explorer, or WISE, captured this image of the star Alpha Camelopardalis, or Alpha Cam, in astronomer-speak, speeding through the sky like a motorcyclist zipping through rush-hour traffic. The supergiant star Alpha Cam is the bright star in the middle of this image, surrounded on one side by an arc-shaped cloud of dust and gas -- a bow shock -- which is colored red in this infrared view.

Such fast-moving stars are called runaway stars. The distance and speed of Alpha Cam is somewhat uncertain. It is probably somewhere between 1,600 and 6,900 light-years away and moving at an astonishing rate of somewhere between 680 and 4,200 kilometers per second (between 1.5 and 9.4 million mph). It turns out that WISE is particularly adept at imaging bow shocks from runaway stars. Previous examples can be seen around Zeta Ophiuchi , AE Aurigae, and Menkhib. But Alpha Cam revs things up into a different gear. To put its speed into perspective, if Alpha Cam were a car driving across the United States at 4,200 kilometers per second, it would take less than one second to travel from San Francisco to New York City!

Astronomers believe runaway stars are set into motion either through the supernova explosion of a companion star or through gravitational interactions with other stars in a cluster. Because Alpha Cam is a supergiant star, it gives off a very strong wind. The speed of the wind is boosted in the forward direction the star is moving in space. When this fast-moving wind slams into the slower-moving interstellar material, a bow shock is created, similar to the wake in front of the bow of a ship in water. The stellar wind compresses the interstellar gas and dust, causing it to heat up and glow in infrared. Alpha Cam's bow shock cannot be seen in visible light, but WISE's infrared detectors show us the graceful arc of heated gas and dust around the star.