Grow Text SizeShrink Text Size
A Galaxy for Everyone 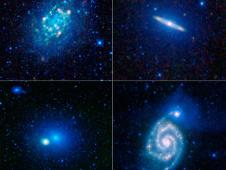 To celebrate the one-year anniversary of the launch of NASA's Wide-Field Infrared Explorer, or WISE, the mission team has put together this image showing just a sample of the millions of galaxies that have been imaged by WISE during its survey of the entire sky. Image credit: NASA/JPL-Caltech/UCLA
› Full image and caption
› View image gallery

This collage of galaxies from NASA's Wide-Field Infrared Survey Explorer, or WISE, showcases the many "flavors" that galaxies come in, from star-studded spirals to bulging ellipticals to those paired with other companion galaxies. The WISE team put this collage together to celebrate the anniversary of the mission's launch on Dec. 14, 2009.

After launch and a one-month checkout period, WISE began mapping the sky in infrared light. By July of this year, the entire sky had been surveyed, detecting hundreds of millions of objects, including the galaxies pictured here. In October of this year, after scanning the sky about one-and–a-half times, the spacecraft ran out of its frozen coolant, as planned. With its two shortest-wavelength infrared detectors still operational, the mission continues to survey the sky, focusing primarily on asteroids and comets.

NGC 300 is seen in the image in the upper left panel. This is a textbook spiral galaxy. In fact, it is such a good representation of a spiral galaxy that astronomers have studied it in great detail to learn about the structure of all spirals in general. Infrared images like this one from WISE show astronomers where areas of gas and warm dust are concentrated -- features that cannot be seen in visible light. At about 39,000 light-years across, NGC 300 is only about 40 percent the size of the Milky Way galaxy.

The upper right image shows Messier 104, or M104, also known as the Sombrero galaxy. Although M104 is also classified as a spiral galaxy, it has a very different appearance than NGC 300. In part, this is because the dusty, star-forming spiral disk in M104 is seen nearly edge-on from our point of view. M104 also has a large, ball-shaped bulge component of older stars, seen here in blue.

The large, fuzzy grouping of stars at the center of the lower left panel is the galaxy Messier 60, or M60. This galaxy does not have a spiral disk, just a bulge, making it a massive elliptical galaxy. M60 is about 20 percent larger than our Milky Way galaxy, and lies in the Virgo cluster of galaxies. The brighter, dense spot inside but off-center from the blue core of M60 is a separate spiral galaxy called NGC 4647. In addition, two different asteroids were caught crossing the field of view when WISE imaged this portion of the sky (seen as dotted green lines extending out from M60 at about the 2 o'clock and 8 o'clock positions).

The galaxy in the lower right panel is Messier 51, or NGC 5194, also frequently referred to as the Whirlpool galaxy. The Whirlpool is a "grand design" spiral galaxy. It is interacting with its smaller companion -- NGC 5195, a dwarf galaxy, which can be seen as a bright spot near the tip of the spiral arm extending up and to the right of the Whirlpool galaxy.

JPL manages and operates the Wide-field Infrared Survey Explorer for NASA's Science Mission Directorate, Washington. The principal investigator, Edward Wright, is at UCLA. The mission was competitively selected under NASA's Explorers Program managed by the Goddard Space Flight Center, Greenbelt, Md. The science instrument was built by the Space Dynamics Laboratory, Logan, Utah, and the spacecraft was built by Ball Aerospace & Technologies Corp., Boulder, Colo. Science operations and data processing take place at the Infrared Processing and Analysis Center at the California Institute of Technology in Pasadena. Caltech manages JPL for NASA. More information is online at http://www.nasa.gov/wise and http://wise.astro.ucla.edu and http://www.jpl.nasa.gov/wise .