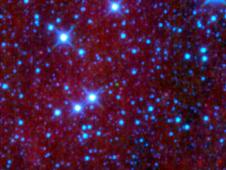 The brown dwarf (green) is located 18 to 30 light-years away in the northern constellation of Camelopardalis, or the giraffe. Image credit: NASA/JPL-Caltech/UCLA
› Full image and caption
› View image gallery

WISE is scanning the whole sky in infrared light, picking up the glow of not just brown dwarfs but also asteroids, stars and galaxies. It has sent millions of images down to Earth, in which infrared light of different wavelengths is color-coded in the images.

"The brown dwarfs jump out at you like big, fat, green emeralds," said Amy Mainzer, the deputy project scientist of WISE at NASA's Jet Propulsion Laboratory in Pasadena, Calif. Mainzer, who makes jewelry in her spare time, explained that the brown dwarfs appear like green gems in WISE images because the methane in their atmospheres absorbs the infrared light that has been coded blue, and because they are too faint to give off the infrared light that is color-coded red. The only color left is green.

Like Jupiter, brown dwarfs are made up of gas -- a lot of it in the form of methane, hydrogen sulfide, and ammonia. These gases would be deadly to humans at the concentrations found around brown dwarfs. And they wouldn't exactly smell pretty.

"If you could bottle up a gallon of this object's atmosphere and bring it back to Earth, smelling it wouldn't kill you, but it would stink pretty badly -- like rotten eggs with a hint of ammonia," said Mainzer.

Mainzer and other members of the WISE team are already accumulating a quarry of brown dwarf candidates similar to this one. Brown dwarfs have masses somewhere between those of a star and a planet. They start out like stars as collapsing balls of gas, but they lack the mass to fuse atoms together at their core and shine with starlight. As time goes on, these lightweights cool off, until they can only be seen in infrared light. There could be many such objects lurking in the neighborhood of our sun, but astronomers know of only a handful so far. WISE is expected to find hundreds, including the coolest and closest of all.

"They're a great test of our understanding of atmospheric physics of planets, since they don't have solid surfaces, and there's no big, bright sun to get in the way," said co-author Michael Cushing, a postdoctoral fellow at JPL.

WISE's new brown dwarf is named WISEPC J045853.90+643451.9 for its location in the sky. It is estimated to be 18 to 30 light-years away and is one of the coolest brown dwarfs known, with a temperature of about 600 Kelvin, or 620 degrees Fahrenheit. That's downright chilly as far as stars go. The fact that this brown dwarf jumped out of the data so easily and so quickly -- it was spotted 57 days into the survey mission -- indicates that WISE will discover many, many more. The discovery was confirmed by follow-up observations at the University of Virginia's Fan Mountain telescope, the Large Binocular Telescope in southeastern Arizona, and NASA's Infrared Telescope Facility on Mauna Kea, Hawaii. The results are in press at the Astrophysical Journal.

Read more about how NASA's Spitzer Space Telescope and WISE are hunting down the coldest brown dwarfs here http://www.jpl.nasa.gov/news/news.cfm?release=2010-210 .