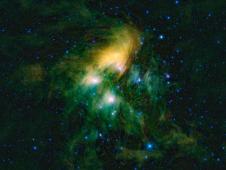 This image shows the famous Pleiades cluster of stars as seen through the eyes of WISE, or NASA's Wide-field Infrared Survey Explorer. The mosaic contains a few hundred image frames -- just a fraction of the more than one million WISE has captured so far as it completes its first survey of the entire sky in infrared light. Image credit: NASA/JPL-Caltech/UCLA
› Full image and caption
› Animation and caption
› View image gallery

PASADENA, Calif. -- NASA's Wide-field Infrared Survey Explorer, or WISE, will complete its first survey of the entire sky on July 17, 2010. The mission has generated more than one million images so far, of everything from asteroids to distant galaxies.

"Like a globe-trotting shutterbug, WISE has completed a world tour with 1.3 million slides covering the whole sky," said Edward Wright, the principal investigator of the mission at the University of California, Los Angeles.

Some of these images have been processed and stitched together into a new picture being released today. It shows the Pleiades cluster of stars, also known as the Seven Sisters, resting in a tangled bed of wispy dust. The pictured region covers seven square degrees, or an area equivalent to 35 full moons, highlighting the telescope's ability to take wide shots of vast regions of space.

The new picture was taken in February. It shows infrared light from WISE's four detectors in a range of wavelengths. This infrared view highlights the region's expansive dust cloud, through which the Seven Sisters and other stars in the cluster are passing. Infrared light also reveals the smaller and cooler stars of the family.

To view the new image, as well as previously released WISE images, visit http://www.nasa.gov/wise and http://wise.astro.ucla.edu .

"The WISE all-sky survey is helping us sift through the immense and diverse population of celestial objects," said Hashima Hasan, WISE Program scientist at NASA Headquarters in Washington. "It's a great example of the high impact science that's possible from NASA's Explorer Program."

The first release of WISE data, covering about 80 percent of the sky, will be delivered to the astronomical community in May of next year. The mission scanned strips of the sky as it orbited around the Earth's poles since its launch last December. WISE always stays over the Earth's day-night line. As the Earth moves around the sun, new slices of sky come into the telescope's field of view. It has taken six months, or the amount of time for Earth to travel halfway around the sun, for the mission to complete one full scan of the entire sky.

For the next three months, the mission will map half of the sky again. This will enhance the telescope's data, revealing more hidden asteroids, stars and galaxies. The mapping will give astronomers a look at what's changed in the sky. The mission will end when the instrument's block of solid hydrogen coolant, needed to chill its infrared detectors, runs out.

"The eyes of WISE have not blinked since launch," said William Irace, the mission's project manager at NASA's Jet Propulsion Laboratory in Pasadena, Calif. "Both our telescope and spacecraft have performed flawlessly and have imaged every corner of our universe, just as we planned."

So far, WISE has observed more than 100,000 asteroids, both known and previously unseen. Most of these space rocks are in the main belt between Mars and Jupiter. However, some are near-Earth objects, asteroids and comets with orbits that pass relatively close to Earth. WISE has discovered more than 90 of these new near-Earth objects. The infrared telescope is also good at spotting comets that orbit far from Earth and has discovered more than a dozen of these so far.

WISE's infrared vision also gives it a unique ability to pick up the glow of cool stars, called brown dwarfs, in addition to distant galaxies bursting with light and energy. These galaxies are called ultra-luminous infrared galaxies. WISE can see the brightest of them.

"WISE is filling in the blanks on the infrared properties of everything in the universe from nearby asteroids to distant quasars," said Peter Eisenhardt of JPL, project scientist for WISE. "But the most exciting discoveries may well be objects we haven't yet imagined exist."

JPL manages the Wide-field Infrared Survey Explorer for NASA's Science Mission Directorate in Washington. The mission was selected under NASA's Explorers Program managed by the Goddard Space Flight Center in Greenbelt, Md. The science instrument was built by the Space Dynamics Laboratory in Logan, Utah, and the spacecraft was built by Ball Aerospace & Technologies Corp., in Boulder, Colo. Science operations and data processing take place at the Infrared Processing and Analysis Center at the California Institute of Technology in Pasadena. Caltech manages JPL for NASA.