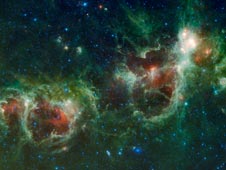 The Heart and Soul nebulae are seen in this infrared mosaic from NASA's Wide-field Infrared Survey Explorer, or WISE. Image credit: NASA/JPL-Caltech/UCLA
› Full image and caption

PASADENA, Calif. -- NASA's Wide-field Infrared Survey Explorer, or WISE, has captured a huge mosaic of two bubbling clouds in space, known as the Heart and Soul nebulae. The space telescope, which has completed about three-fourths of its infrared survey of the entire sky, has already captured nearly one million frames like the ones making up this newly released mosaic.

The picture is online at http://www.nasa.gov/mission_pages/WISE/news/wise20100524.html.

The Heart nebula is named after its resemblance to a human heart; the nearby Soul nebula happens to resemble a heart too, but only the symbolic kind with two lobes. The nebulae, which lie about 6,000 light-years away in the constellation Cassiopeia, are both massive star-making factories, marked by giant bubbles blown into surrounding dust by radiation and winds from the stars. The infrared vision of WISE allows it to see into the cooler and dustier crevices of clouds like these, where gas and dust are just beginning to collect into new stars.

The new image was captured as WISE circled over Earth's poles, scanning strips of the sky. It is stitched together from 1,147 frames, taken with a total exposure time of three-and-a-half hours.

The mission will complete its first map of the sky in July 2010. It will then spend the next three months surveying much of the sky a second time, before the solid-hydrogen coolant needed to chill its infrared detectors runs dry. The first installment of the public WISE catalog will be released in summer 2011.

About 960,000 WISE images have been beamed down from space to date. Some show ethereal star-forming clouds, while others reveal the ancient light of very remote, powerful galaxies. And many are speckled with little dots that are asteroids in our solar system. So far, the mission has observed more than 60,000 asteroids, most of which lie in the main belt, orbiting between Mars and Jupiter. About 11,000 of these objects are newly discovered, and about 50 of them belong to a class of near-Earth objects, which have paths that take them within about 48 million kilometers (30 million miles) of Earth’s orbit.

One goal of the WISE mission is to study asteroids throughout our solar system and to find out more about how they vary in size and composition. Infrared helps with this task because it can get better size measurements of the space rocks than visible light.

"Infrared will help us understand more about the sizes, properties and origins of asteroids near and far," said Amy Mainzer, the principal investigator of NEOWISE, a program to study and catalog asteroids seen by WISE (the acronym comes from combining near-Earth object, or NEO, with WISE).

WISE will also study the Trojans, asteroids that run along with Jupiter in its orbit around the sun in two packs -- one in front of and one behind the gas giant. It has seen more than 800 of these objects, and by the end of the mission, should have observed about half of all 4,500 known Trojans. The results will address dueling theories about how the outer planets evolved.

"WISE is the first survey capable of observing the two clouds in a uniform way, and this will provide valuable insight into the early solar system," said astronomer Tommy Grav of Johns Hopkins University, Baltimore, Md., who presented the information today at the astronomy meeting.

Comets have also made their way into WISE images, with more than 72 observed so far, about a dozen of them new. WISE is taking a census of the types of orbits comets ride in. The data will help explain what kicks comets out of their original, more distant orbits and in toward the sun.

JPL manages WISE for NASA's Science Mission Directorate, Washington. The principal investigator, Edward Wright, is at UCLA. The mission was competitively selected under NASA's Explorers Program managed by the Goddard Space Flight Center, Greenbelt, Md. The science instrument was built by the Space Dynamics Laboratory, Logan, Utah, and the spacecraft was built by Ball Aerospace & Technologies Corp., Boulder, Colo. Science operations and data processing take place at the Infrared Processing and Analysis Center at the California Institute of Technology in Pasadena. Caltech manages JPL for NASA. More information is online at http://www.nasa.gov/wise and http://wise.astro.ucla.edu .