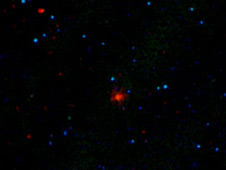 The red smudge at the center of this picture is the first comet discovered by NASA's Wide-Field Infrared Survey Explorer, or WISE. Image credit: NASA/JPL-Caltech/UCLA
› Full image and caption

NASA's Wide-field Infrared Survey Explorer, or WISE, has discovered its first comet, one of many the mission is expected to find among millions of other objects during its ongoing survey of the whole sky in infrared light.

Officially named "P/2010 B2 (WISE)," but known simply as WISE, the comet is a dusty mass of ice more than 2 kilometers (1.2 miles) in diameter. It probably formed around the same time as our solar system, about 4.5 billion years ago. Comet WISE started out in the cold, dark reaches of our solar system, but after a long history of getting knocked around by the gravitational forces of Jupiter, it settled into an orbit much closer to the sun. Right now, the comet is heading away from the sun and is about 175 million kilometers (109 million miles) from Earth.

"Comets are ancient reservoirs of water. They are one of the few places besides Earth in the inner solar system where water is known to exist," said Amy Mainzer of NASA's Jet Propulsion Laboratory in Pasadena, Calif.  Mainzer is the principal investigator of NEOWISE, a project to find and catalog new asteroids and comets spotted by WISE (the acronym combines WISE with NEO, the shorthand for near-Earth object).

"With WISE, we have a powerful tool to find new comets and learn more about the population as a whole. Water is necessary for life as we know it, and comets can tell us more about how much there is in our solar system."

The WISE telescope, which launched into a polar orbit around Earth on Dec. 14, 2009, is expected to discover anywhere from a few to dozens of new comets, in addition to hundreds of thousands of asteroids. Comets are harder to find than asteroids because they are much more rare in the inner solar system. Whereas asteroids tour around in the "main belt" between the orbits of Mars and Jupiter, large numbers of comets orbit farther away, in the icy outer reaches of our solar system.

Both asteroids and comets can fall into orbits that bring them close to Earth's path around the sun. Most of these "near-Earth objects" are asteroids but some are comets. WISE is expected to find new near-Earth comets, and this will give us a better idea of how threatening they might be to Earth.

"It is very unlikely that a comet will hit Earth," said James Bauer, a scientist at JPL working on the WISE project, "But, in the rare chance that one did, it could be dangerous. The new discoveries from WISE will give us more precise statistics about the probability of such an event, and how powerful an impact it might yield."

The space telescope spotted the comet during its routine scan of the sky on January 22. Sophisticated software plucked the comet out from the stream of images pouring down from space by looking for objects that move quickly relative to background stars. The comet discovery was followed up by a combination of professional and amateur astronomers using telescopes across the United States.

A teacher also teamed up with an observer to measure comet WISE using a home-built telescope next to a cornfield in Illinois. Their research is part of the International Astronomical Search Collaboration, an education program that helps teachers and students observe comets and asteroids (more information is online at http://iasc.hsutx.edu/ ).

All the data are catalogued at the Minor Planet Center, in Cambridge, Mass., the worldwide clearinghouse for all observations and orbits of minor planets and comets.

Though this particular body is actively shedding dust, WISE is also expected to find dark, dead comets. Once a comet has taken many trips around the sun, its icy components erode away, leaving only a dark, rocky core.  Not much is known about these objects because they are hard to see in visible light. WISE's infrared sight should be able to pick up the feeble glow of some of these dark comets, answering questions about precisely how and where they form.

"Dead comets can be darker than coal," said Mainzer. "But in infrared light, they will pop into view. One question we want to answer with WISE is how many dead comets make up the near-Earth object population."

The mission will spend the next eight months mapping the sky one-and-a-half times. A first batch of data will be available to the public in the spring of 2011, and the final catalog a year later. Selected images and findings will be released throughout the mission.

JPL manages the Wide-field Infrared Survey Explorer for NASA's Science Mission Directorate, Washington. The principal investigator, Edward Wright, is at UCLA. The mission was competitively selected under NASA's Explorers Program managed by the Goddard Space Flight Center, Greenbelt, Md. The science instrument was built by the Space Dynamics Laboratory, Logan, Utah, and the spacecraft was built by Ball Aerospace & Technologies Corp., Boulder, Colo. Science operations and data processing take place at the Infrared Processing and Analysis Center at the California Institute of Technology in Pasadena. Caltech manages JPL for NASA. The ground-based observations are partly supported by the National Science Foundation. The Minor Planet Center is funded by NASA.  More information is online at http://www.nasa.gov/wise and http://wise.astro.ucla.edu.