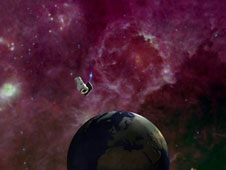 This artist's conception shows NASA's Wide-field Infrared Survey Explorer, or WISE, mapping the whole sky in infrared. The mission will unveil hundreds of thousands of asteroids, and hundreds of millions of stars and galaxies. Image credit: Ball/NASA/JPL-Caltech
› Full image and caption

WISE, which launched Dec. 14, 2009, from Vandenberg Air Force Base in California, will uncover hundreds of thousands of asteroids, and hundreds of millions of stars and galaxies. Its vast catalog of data will provide astronomers and other missions with data for mine for decades to come.