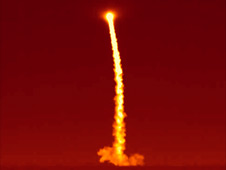 All systems are behaving as expected on NASA's Wide-field Infrared Survey Explorer (WISE), which rocketed into the sky just before dawn on Dec. 14 from Vandenberg Air Force Base in California. The mission will undergo a one-month checkout before beginning the most detailed survey yet of the entire sky in infrared light. Hundreds of millions of objects will populate its vast catalog, including dark asteroids, the closest "failed" stars and tremendously energetic galaxies.

Shortly after the space telescope reached its polar orbit around Earth on Dec. 14, it acquired the sun's position and lined up with its solar panels facing the sun. Engineers and scientists continue to check out the spacecraft's pointing-control system in preparation for jettisoning the instrument's cover, an event now scheduled for Dec. 29. With the cover off, WISE will get its first look at the sky.

The cover serves as the top to a Thermos-like bottle, called a cryostat, which chills the heat-sensitive infrared instrument. The instrument consists of a 40-centimeter (16-inch) telescope and four detectors, each with one million pixels. Just as a Thermos bottle keeps your coffee warm or your iced tea cold with a thin vacuum layer, a vacuum inside WISE's cryostat kept the instrument cold while it was on the ground.

The cover also prevented light from reaching the detectors, and protected the chilly interior of the instrument from heat that could have come about from unintentional pointing at Earth or the sun during launch. After WISE was pushed away from its rocket, it wobbled around slightly before stabilizing (a process that took surprisingly little time -- only 3 minutes). Without the cover, the heat from Earth or the sun would have shortened the time the cryostat kept the instrument cold, and possibly damaged the detectors.

Now that WISE is steadily perched in the vacuum of space, it will no longer need the instrument cover; in fact, space will provide an even better vacuum. Engineers are preparing to pop the cover by making sure the pointing-control system is functioning properly. Once everything has been checked out, they will send a signal to fire pyrotechnic devices, releasing nuts that are clamping the cover shut. Three springs will then push the lid away and into an orbit closer to Earth than that of the spacecraft.

All spacecraft systems are functioning normally, and both the low- and high-rate data links are working properly. The instrument's detectors are turned on, and though they are currently staring into the backside of the instrument cover, they will soon see the light of stars. WISE's first images will be released within one month after its one-month checkout.

JPL manages the Wide-field Infrared Survey Explorer for NASA's Science Mission Directorate, Washington. The principal investigator, Edward Wright, is at UCLA. The mission was competitively selected under NASA's Explorers Program managed by the Goddard Space Flight Center, Greenbelt, Md. The science instrument was built by the Space Dynamics Laboratory, Logan, Utah, and the spacecraft was built by Ball Aerospace & Technologies Corp., Boulder, Colo. Science operations and data processing take place at the Infrared Processing and Analysis Center at the California Institute of Technology in Pasadena. Caltech manages JPL for NASA. More information is online at http://www.nasa.gov/wise, http://wise.astro.ucla.edu and http://www.jpl.nasa.gov/wise.