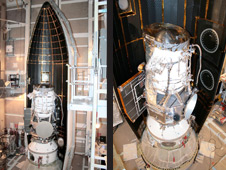 WISE is shown inside one-half of the nose cone, or fairing, that will protect it during launch. The spacecraft is clamped to the top of the rocket above the white conical fitting. The fairing will split open like a clamshell about five minutes after launch. Image credit: United Launch Alliance/ JPL-Caltech
› Larger image

The delay allows the launch team additional time to troubleshoot a technical issue. During final systems checks of the Delta II rocket Wednesday in preparation for flight, an anomaly in the motion of a booster steering engine was detected.

The weather forecast for Dec. 12 calls for thick clouds, disturbed weather and precipitation, resulting in an 80 percent chance of conditions preventing liftoff.

Launch and mission managers will discuss the weather and liftoff status during meetings today. Updates to the WISE mission status will be issued as new information becomes available.

The WISE spacecraft will circle Earth over the poles, scanning the entire sky one-and-a-half times in nine months. The mission will uncover hidden cosmic objects, including the coolest stars, dark asteroids and the most luminous galaxies.