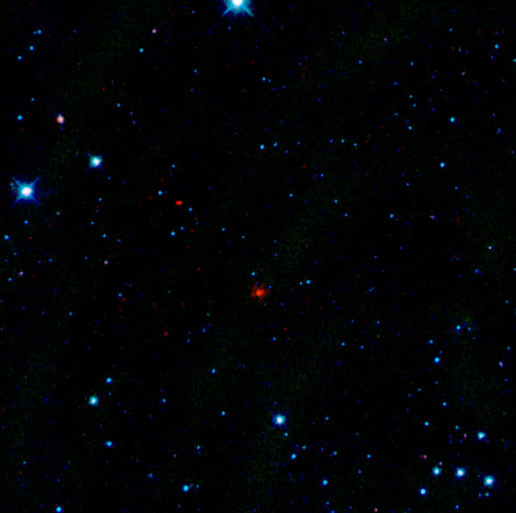 The red smudge at the center of this picture is the first comet discovered by NASA's Wide-Field Infrared Survey Explorer, or WISE. The comet, officially named "P/2010 B2 (WISE)," but known simply as WISE, is a dusty mass of ice more than 2 kilometers (1.2 miles) in diameter. The comet parades around the sun every 4.7 years. Sunlight causes dust and gas to erode off the comet's surface into an outer shell, or coma, and a tail (while Comet WISE's coma and tail are hard to see in the picture, they make the red dot look fuzzy). The farthest reach of comet WISE from the sun is about 4 astronomical units, and the closest approach is 1.6 astronomical units (an astronomical unit is the distance between Earth and the sun). The comet is 175 million kilometers (109 million miles) away from Earth.

WISE spotted the comet with its infrared vision during its ongoing survey of the whole sky in infrared light. In this picture, the shortest wavelengths of infrared light are blue, and the longest are red. The comet appears red because it is cooler than the surrounding stars – the cooler an object, the longer the wavelengths of light it emits. The other red dot above the comet is an asteroid, called "117102 (2004 OF3)." It's not as fuzzy as the comet because it doesn't have a coma and tail.