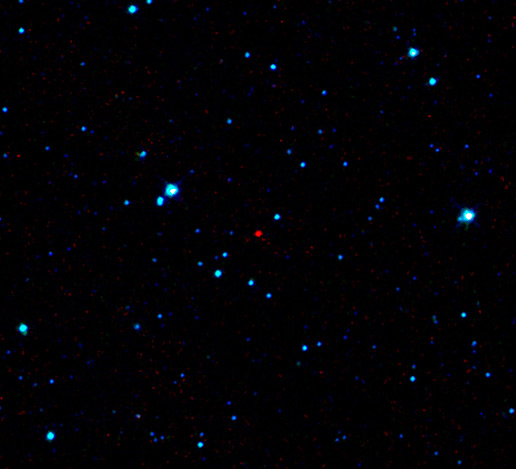 The red dot at the center of this image is the first near-Earth asteroid discovered by NASA's Wide-Field Infrared Survey Explorer, or WISE -- an all-sky mapping infrared mission designed to see all sorts of cosmic objects.

Near-Earth objects are asteroids and comets with orbits that come close to Earth's path around the sun. This particular asteroid, called 2010 AB78, is roughly one kilometer (0.6 miles) in diameter, and is currently about 158 million kilometers (98 million miles) away from Earth. Its elliptical-shaped orbit takes it out beyond Mars and back in about as close to the sun as Earth. Because the asteroid's orbit is tilted relative to the plane of our solar system, astronomers do not think it poses a hazard to our planet. As with all near-Earth objects, 2010 AB78 will continue to be monitored.

The image shows three infrared wavelengths, with red representing the longest wavelength of 12 microns, and green and blue showing 4.6- and 3.4-micron light, respectively. The asteroid appears redder than the rest of the background stars because it is cooler and emits most of its light at longer infrared wavelengths. In visible light, this space rock is very faint and difficult to see.

WISE, which began its all-sky survey on Jan. 14, 2010, is expected to find about one hundred thousand previously undiscovered asteroids in the Main Belt between Mars and Jupiter, and hundreds of new near-Earth asteroids. It will also spot millions of new stars and galaxies.