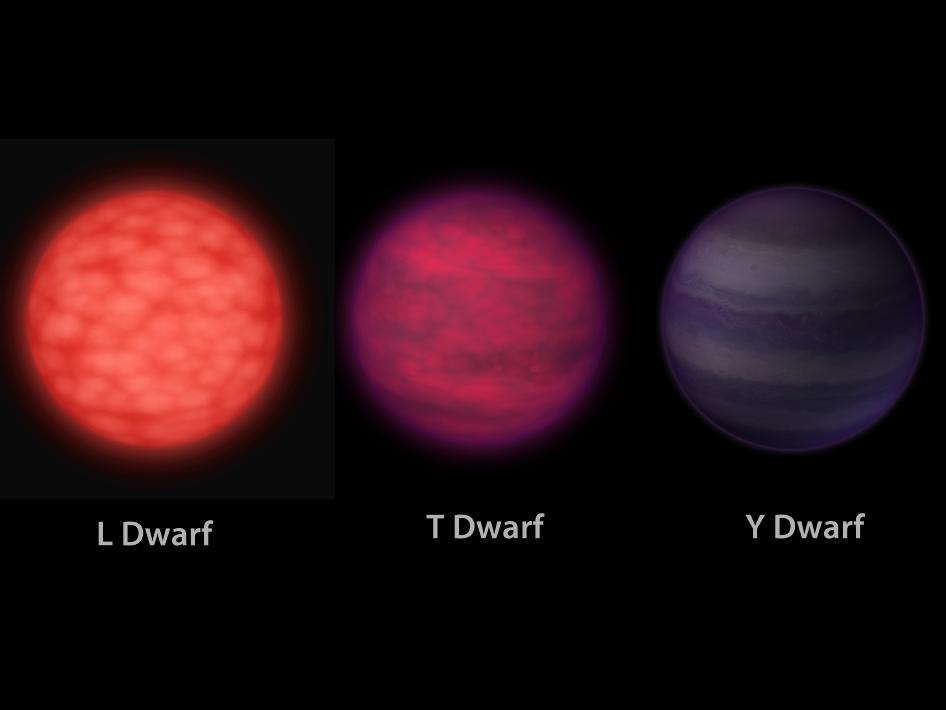 A Trio of Brown Dwarfs

This artist's conception illustrates what brown dwarfs of different types might look like to a hypothetical interstellar traveler who has flown a spaceship to each one. Brown dwarfs are like stars, but they aren't massive enough to fuse atoms steadily and shine with starlight -- as our sun does so well.

On the left is an L dwarf, in the middle is a T dwarf, and on the right is a Y dwarf. The objects are progressively cooler in atmospheric temperatures as you move from left to right. Y dwarfs are the newest and coldest class of brown dwarfs and were discovered by NASA's Wide-field Infrared Survey Explorer, or WISE. WISE was able to detect these Y dwarfs for the first time because it surveyed the entire sky deeply at the infrared wavelengths at which these bodies emit most of their light.

The L dwarf is seen as a dim red orb to the eye. The T dwarf is even fainter and appears with a darker reddish, or magenta, hue. The Y dwarf is dimmer still. Because astronomers have not yet detected Y dwarfs at the visible wavelengths we see with our eyes, the choice of a purple hue is done mainly for artistic reasons. The Y dwarf is also illustrated as reflecting a faint amount of visible starlight from interstellar space.

In this rendering, the traveler's spaceship is the same distance from each object. This illustrates an unusual property of brown dwarfs -- that they all have the same dimensions, roughly the size of the planet Jupiter, regardless of their mass. This mass disparity can be as large as fifteen times or more when comparing an L to a Y dwarf, despite the fact that both objects have the same radius.