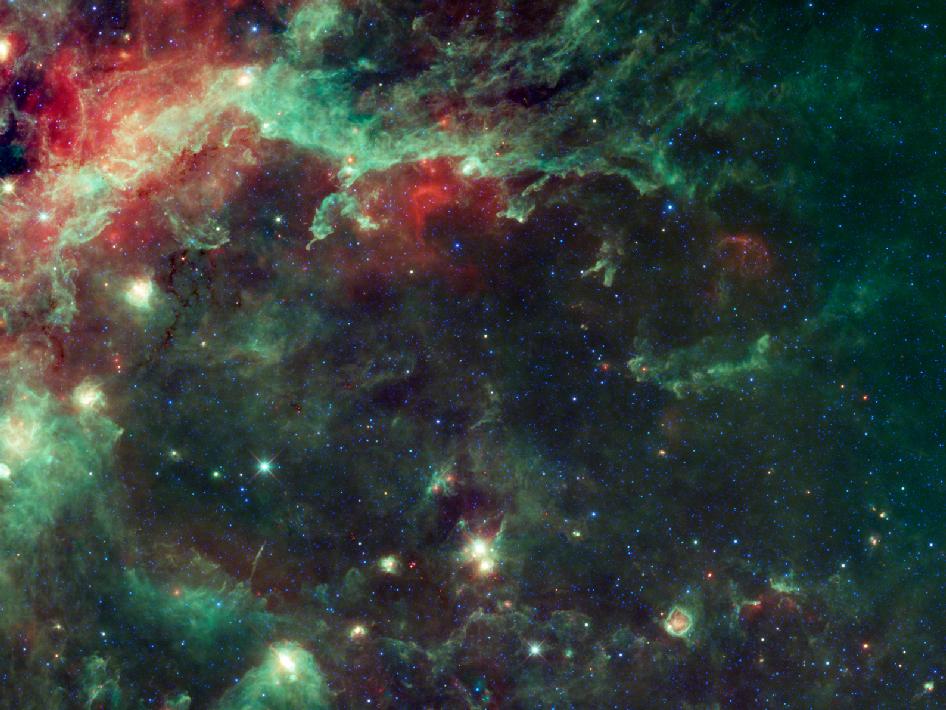 Star Formation in the Heart of the Swan

NASA's Wide-field Infrared Survey Explorer, or WISE, captured this image of a huge complex of star-forming clouds and stellar clusters found in the constellation Cygnus. Best known as a swan winging its way across the night, the constellation Cygnus is easily seen in the northern hemisphere's summertime sky. The constellation is also commonly known as the Northern Cross. WISE zooms in on the region surrounding the swan's heart, revealing vast clouds of dust that light up the sky in infrared. This image covers an area of the sky nearly ten times as wide as the full moon and nearly nine times as high (4.93 by 4.47 degrees).

The heart of the swan (or the center of the cross) is represented by the star Sadr, seen here as the bright yellow spot near the point where the green filaments in the upper part of the image converge and bend down towards the left . This star's name comes from the Arabic phrase "Al Sadr al Dajājah," meaning the Hen's Breast. Sadr is also known as Gamma Cygni because it is the third brightest star in the constellation Cygnus. Although Sadr is very bright in visible light, in infrared light it is overshadowed by surrounding clouds of dust and gas, including the nebulae IC 1318, LDN 889 and NGC 6888. Although it looks like Sadr is embedded in the nebulae, it is actually only 1,800 light years away whereas the nebula IC 1318 is much more distant at 4,900 light-years.

IC 1318 can be seen as the bright green and red clouds that curve to the left of Sadr. There are three distinct parts of this nebula that are identified as IC 1318 A, B and C. This nebula is considered an emission nebula because radiation from nearby stars heats the cloud, causing it to become ionized and emit visible light.

When viewed through optical telescopes, a black rift separates IC 1318 B and C. This dark area is known as LDN 889 and is classified as a dark nebula. In visible light, this cloud of dust obscures light from the stars behind it, making it appear as though there is a dark lane cutting through the sky. WISE detects this dust in infrared light so we can see it. LDN stand for Lynds' Dark Nebula, which is a catalogue of dark nebula complied by astronomer B.T. Lynds.

On the opposite side of the WISE image, in the upper right quadrant, we can see a curved red cloud. This is another nebula, NGC 6888. More descriptively known as the Crescent nebula, this is another emission nebula. This nebula is ionized by a very hot, very massive type of star known as a Wolf-Rayet star, WR 136.

Scattered throughout this image are numerous stellar clusters of varying ages. One example is the star cluster Messier 29, which can be found to the left of center in the WISE image. Also known as M29 or NGC 6913, this is an open cluster of stars located approximately 3,700 light-years away.