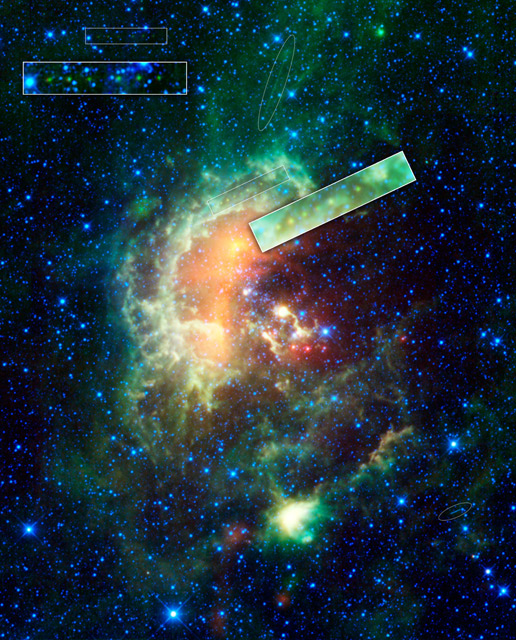 A new infrared image from NASA's Wide-field Infrared Survey Explorer, or WISE, showcases the Tadpole nebula, a star-forming hub in the Auriga constellation about 12,000 light-years from Earth. As WISE scanned the sky, capturing this mosaic of stitched-together frames, it happened to catch an asteroid in our solar system passing by. The asteroid, called 1719 Jens, left tracks across the image, seen as a line of yellow-green dots in the boxes near center. A second asteroid, called 1992 UZ5, was also observed cruising by, as highlighted in the boxes near the upper left (the larger boxes are blown-up versions of the smaller ones).

But that's not all that WISE caught in this busy image -- two satellites orbiting above WISE (highlighted in the ovals) streak through the image, appearing as faint green trails. The apparent motion of asteroids is slower than satellites because asteroids are much more distant, and thus appear as dots that move from one WISE frame to the next, rather than streaks in a single frame.

This Tadpole region is chock full of stars as young as only a million years old -- infants in stellar terms -- and masses over 10 times that of our sun. It is called the Tadpole nebula because the masses of hot, young stars are blasting out ultraviolet radiation that has etched the gas into two tadpole-shaped pillars, called Sim 129 and Sim 130. These "tadpoles" appear as the yellow squiggles near the center of the frame. The knotted regions at their heads are likely to contain new young stars. WISE's infrared vision is helping to ferret out hidden stars such as these.

The 1719 Jens asteroid, discovered in 1950, orbits in the main asteroid belt between Mars and Jupiter. The space rock, which has a diameter of 19 kilometers (12 miles), rotates every 5.9 hours and orbits the sun every 4.3 years.

Twenty-five frames of the region, taken at all four of the wavelengths detected by WISE, were combined into this one image. The space telescope caught 1719 Jens in 11 successive frames. Infrared light of 3.4 microns is color-coded blue: 4.6-micron light is cyan; 12-micron-light is green; and 22-micron light is red.

WISE is an all-sky survey, snapping pictures of the whole sky, including everything from asteroids to stars to powerful, distant galaxies.

JPL manages WISE for NASA's Science Mission Directorate, Washington. The principal investigator, Edward Wright, is at UCLA. The mission was competitively selected under NASA's Explorers Program managed by the Goddard Space Flight Center, Greenbelt, Md. The science instrument was built by the Space Dynamics Laboratory, Logan, Utah, and the spacecraft was built by Ball Aerospace & Technologies Corp., Boulder, Colo. Science operations and data processing take place at the Infrared Processing and Analysis Center at the California Institute of Technology in Pasadena. Caltech manages JPL for NASA.