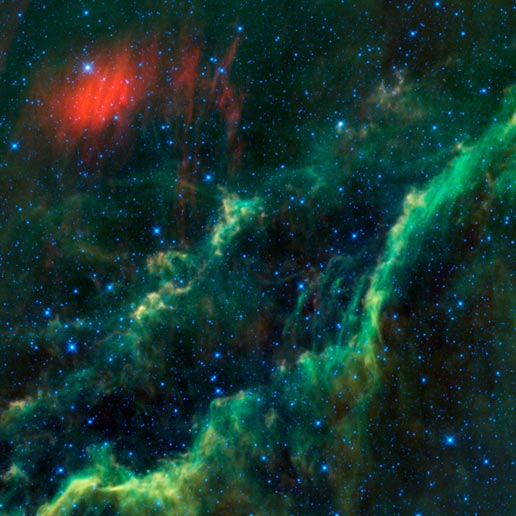 This infrared image from NASA's Wide-field Infrared Survey Explorer, or WISE, features one of the bright stars in the constellation Perseus, named Menkhib (at upper left near the red dust cloud), along with a large star-forming cloud NGC 1499, or the California nebula, seen running diagonally through the image.

Menkhib is one of the hottest stars visible in the night sky; its surface temperature is about 37,000 Kelvin (about 66,000 degrees Fahrenheit, or more than six times hotter than the sun). Because of its high temperature, it appears blue-white to the human eye (almost all stars appear bluish to WISE). It has about 40 times the mass of the sun and gives off 330,000 times the amount of light. Menkhib is a runaway star, and the fast stellar wind it blows is piling up in front of it to create a shock wave. This shock wave is heating up dust, which WISE sees as the red cloud in the upper left of the image.

Menkhib is part of an association of very hot stars that were born from the California nebula only a few million years ago. These stars are lighting up the nebula, as wekk as heating and ionizing it. In visible light, the ionized gas glows red, while in infrared light we see the heated dust (which appears in green and red in this image). The California nebula gets its name due to a resemblance to the shape of the U.S. State California (which you can just make out, outlined by the green dust, if you rotate the image by a little more than 90 degrees clockwise). The entire California nebula stretches across about 100 light-years, and we see about 80 percent of it in this view.

Menkhib and the California nebula are about 1,800 light-years away from Earth. This is within the same spur of the Orion spiral arm of the Milky Way galaxy where we are located.