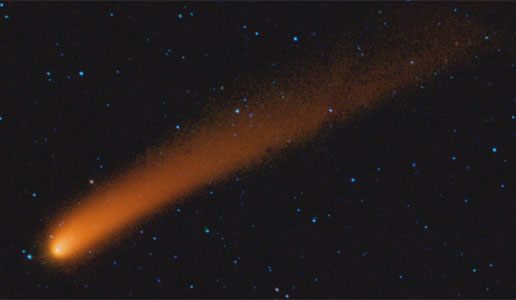 Is it a bird, or a plane? No, it's comet Siding Spring streaking across the sky, as seen by NASA's Wide-field Infrared Survey Explorer, or WISE. This movie stitches together five frames taken by WISE as it orbited Earth during its ongoing infrared survey of the whole sky. The images span about eight hours of time.

The comet, also known as C/2007 Q3, was discovered in 2007 by observers in Australia. The snowball-like mass of ice and dust spent billions of years orbiting in the deep freeze of the Oort Cloud, a spherical cloud of comets surrounding our solar system. At some point, it got knocked out of this orbit and onto a course that brings it closer to the sun. Sunlight has warmed the comet, causing it to shed ices and dust in a long tail that trails behind it.