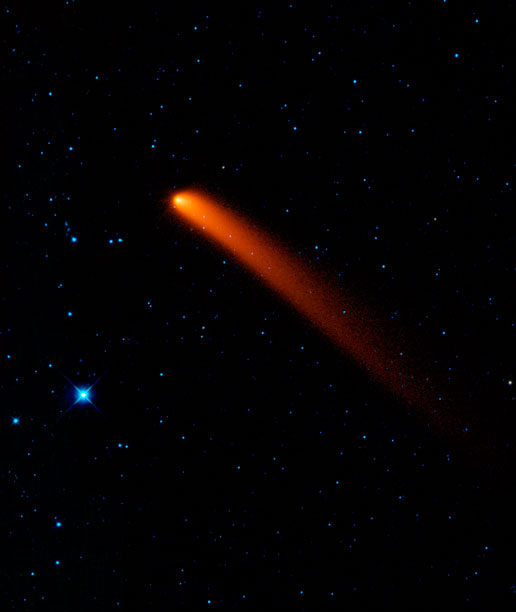 Comet Siding Spring appears to streak across the sky like a superhero in this new infrared image from NASA's Wide-field Infrared Survey Explorer, or WISE. The comet, also known as C/2007 Q3, was discovered in 2007 by observers in Australia.

The snowball-like mass of ice and dust spent billions of years orbiting in the deep freeze of the Oort Cloud, a spherical cloud of comets surrounding our solar system. At some point, it got knocked out of this orbit and onto a course that brings it closer to the sun. On October 7, 2009, it passed as close as 1.2 astronomical units from Earth and 2.25 astronomical units from the sun (an astronomical unit is the distance between the sun and Earth). Now, the comet is leaving the warmer, more hospitable neighborhood of the solar system and heading back out to chillier parts.

A comet like this one can be thought of as a time capsule leftover from the formation of our solar system 4.5 billion years ago. After spending most of its long, lonely life in the darkest, coldest parts of our solar system, it warms up as it approaches the sun. The sunlight causes it to shed ices and dust in a long tail that trails behind it.
Comet Siding Spring, having experienced this "spring" awakening, is glowing in infrared light that WISE can see. Once it moves too far from the sun's warmth and light, it will disappear from view for the foreseeable future.

Astronomers will use these measurements to learn about the comet's size, composition, reflectivity, and the size and makeup of the dust particles in its coma (the hazy cloud surrounding its nucleus) and its tail. WISE data on this and other comets will help unlock clues that lay within these icy time capsules, teaching us about our solar system's evolution.