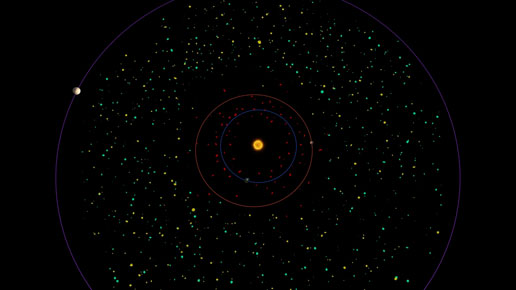 This diagram shows a bird's eye view of our asteroid belt, which lies between the orbits of Mars (red) and Jupiter (purple). NASA's Wide-field Infrared Survey Explorer, or WISE, will see hundreds of thousands of asteroids with diameters larger than 3 kilometers (1.9 miles). The green dots represent populations of asteroids - yellow illustrates the populations WISE is expected to see.

Populations of near-Earth objects -- comets and asteroids with orbits that pass relatively close to Earth's path around the sun (blue) -- are shown in red. WISE is expected to detect about 1,000 near-Earth asteroids.