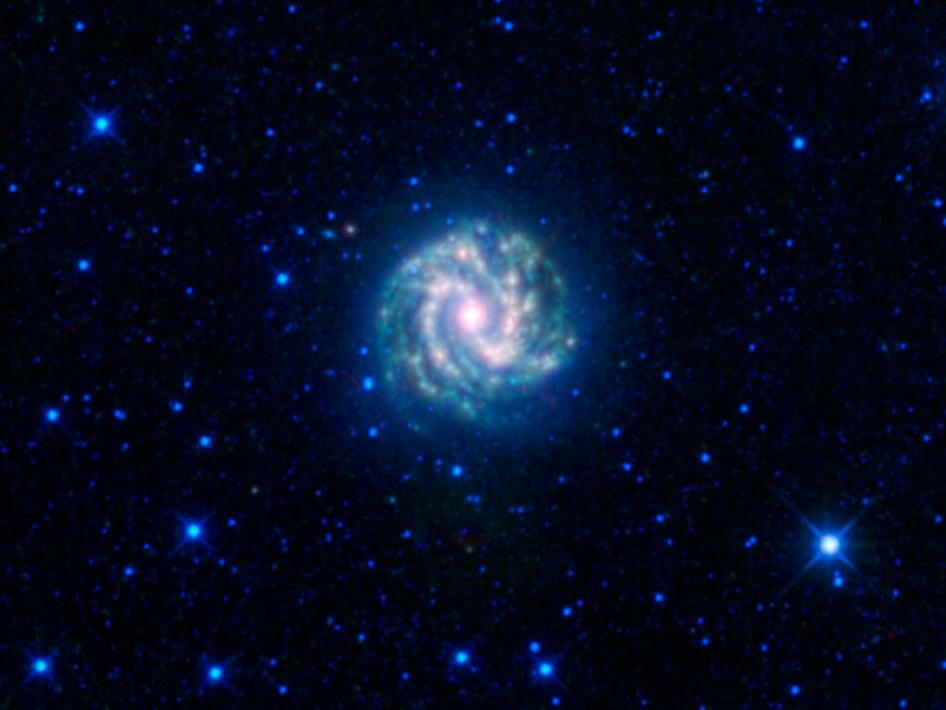 This image from the Wide-field Infrared Survey Explorer, or WISE, shows the nearby galaxy Messier 83, or M83 for short. This is a spiral galaxy approximately 15 million light-years away in the constellation Hydra. Sometimes referred to as the southern Pinwheel galaxy, M83 has a similar appearance to M101, the Pinwheel galaxy, but it is located in the southern sky. At about 55,500 light-years across, M83 is a bit more than half the size of our Milky Way galaxy, with a similar overall structure. Like the Milky Way, most of M83's stars, dust and gas lie in a thin disk decorated with grand spiral arms. We see the disk of M83 nearly face-on (whereas we see the disk of the Milky Way edge-on since we are inside it). The spiral arms are places where the disk is a bit denser, with more stars and gas and higher rates of star formation. Where there is star formation, there are more very bright, short-lived stars, and plenty of dust (green and red in this infrared image). M83 is referred to as a barred spiral galaxy, because its central bulge of stars and dust has a component that is roughly spherical, and a component that is shaped like a bar. This image was made from observations by all four infrared detectors aboard WISE. Blue and cyan represent infrared light at wavelengths of 3.4 and 4.6 microns, which is primarily light from stars. Green and red represent light at 12 and 22 microns, which is primarily emission from warm dust. Image Credit: NASA/JPL-Caltech/UCLA