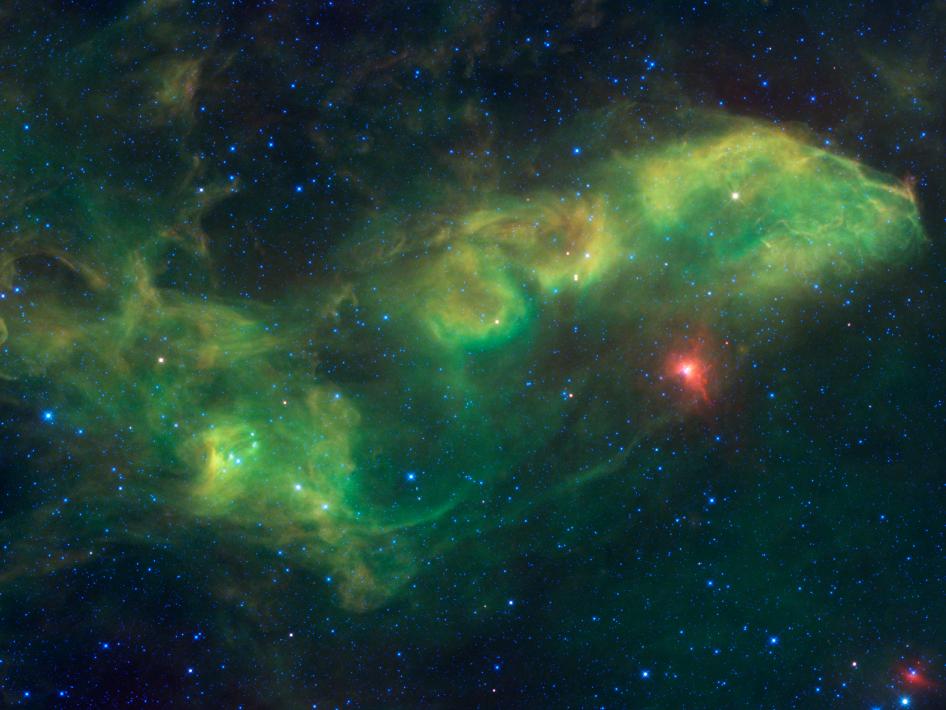 No, it's not a gang of intergalactic mobsters from the famous Star Wars movies. Jabbah is the name of the bright star right of center, surrounded by a red colored dust cloud. The Arabic name means "the forehead of the scorpion." This view from NASA's Wide-field Infrared Survey Explorer, or WISE, takes in an area of the sky in the constellation of Scorpius surrounding Jabbah, which is larger than a grid of eight by eight full moons.

Though Jabbah appears to be a single star, it is actually a whole system of stars (possibly as many as seven), each of which is many times more massive, larger, hotter and more luminous than the sun. The Jabbah system is located about 440 light-years away from us and lights up a giant cloud of dust and gas near it. The cloud near Jabbah is designated IC 4592, and the portion farthest away to the far left in the image is IC 4601.

The other bright stars in this image are mostly part of the "Upper Scorpius Association" and were probably once all born in the same cluster about 5 million years ago. These stars are all moving apart as the cluster ages, and are probably no longer bound to each other by gravity.

Another star of interest in the image is 9 Scorpii, located in the lower right corner with the bright red dust cloud primarily on one side of it. 9 Scorpii is another very massive star that is probably a member of the Upper Scorpius Association. It is also moving through space at an enormous speed of 1,000 kilometers per second (224,000 miles per hour). With such a speed, the star may be a runaway star once in a system with a more massive member that exploded as a supernova and sent 9 Scorpii zooming through space. The red cloud near it may be a bow shock in front of it similar to the stars called Alpha Cam and Zeta Oph.