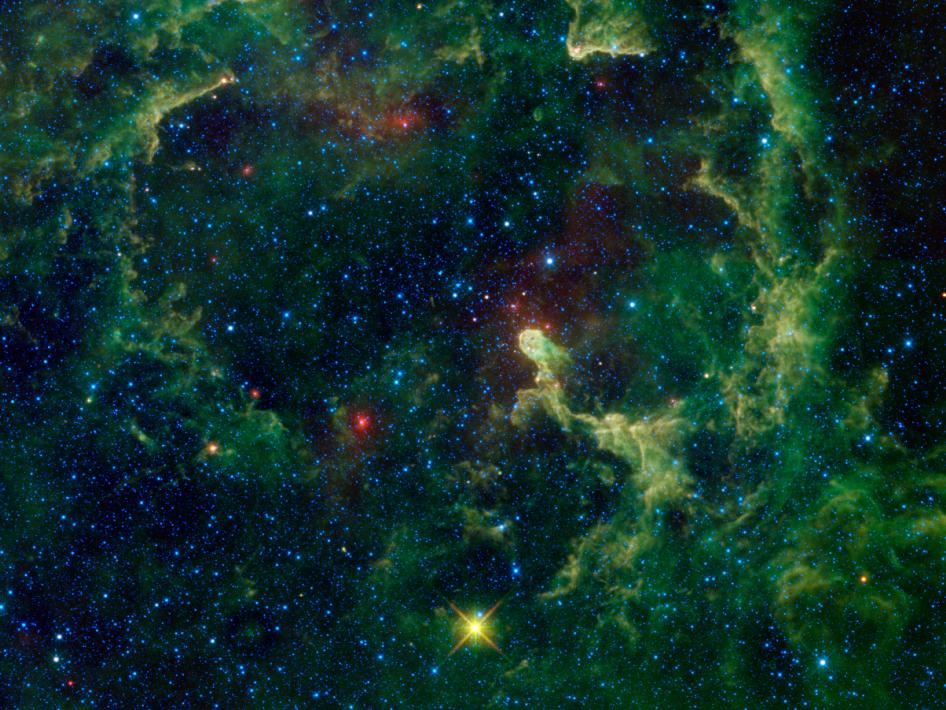 Blowin' in the Stellar Wind

In the same way that dust is blown around by the wind here on Earth, space dust can be blown around by the wind and radiation from stars. This image of the Elephant's Trunk nebula from NASA's Wide-field Survey Explorer, or WISE, shows clouds of dust and gas being pushed and eroded by a massive star. The bright 'trunk' of the nebula near the center is an especially dense cloud holding up against the star's powerful radiation and stellar wind, like a windsock standing strong while the rest of the gas and dust gets broken up and swept away.

'Elephant trunk' is a term commonly used by astronomers for this type of structure. Similar structures can be found in many other nebulae, however this is the only nebula that uses the term in its moniker. More distant examples of elephant trunks can be seen in previously featured WISE images such as LBN 211.91-01.37 and the Soul nebula. They're all formed in basically the same way -- a nearby massive star (or cluster) emits vast amounts of ultraviolet radiation and stellar winds that clear out all of the gas and dust surrounding it, leaving behind only the most dense parts of the cloud. These dense portions then protect some of the gas 'downwind' creating a trunk-like feature.

The culprit star here, HR8281, is located close the center of the image. It's one of the three bright blue stars near the upper left tip of the trunk that form a triangle about as wide as the glowing tip of the trunk. Of those three, it's the uppermost one in the center. Its destructive effects on the surrounding nebula can be seen by the dark cavity it's created, outlined by the brighter dust clouds encircling it. The entire nebula, also known as IC1396A, fills most of the field of view. It's located only 2,450 light-years away, quite close compared to other similar nebulae. The trunk itself is about 30 light-years long, while the full nebula stretches over 100 light-years across.

If you look closely at the tip of the elephant trunk you can see a small dark area, appearing as a sort of opening. This is a small void in the gas formed by a pair of new baby stars that recently formed in the dense cloud. Their radiation and wind is clearing out the nearby gas and dust, creating a smaller version of the same effect seen on a larger scale in the full image. The reddish stars scattered throughout the image are likely new stars still wrapped inside their dusty cocoons.