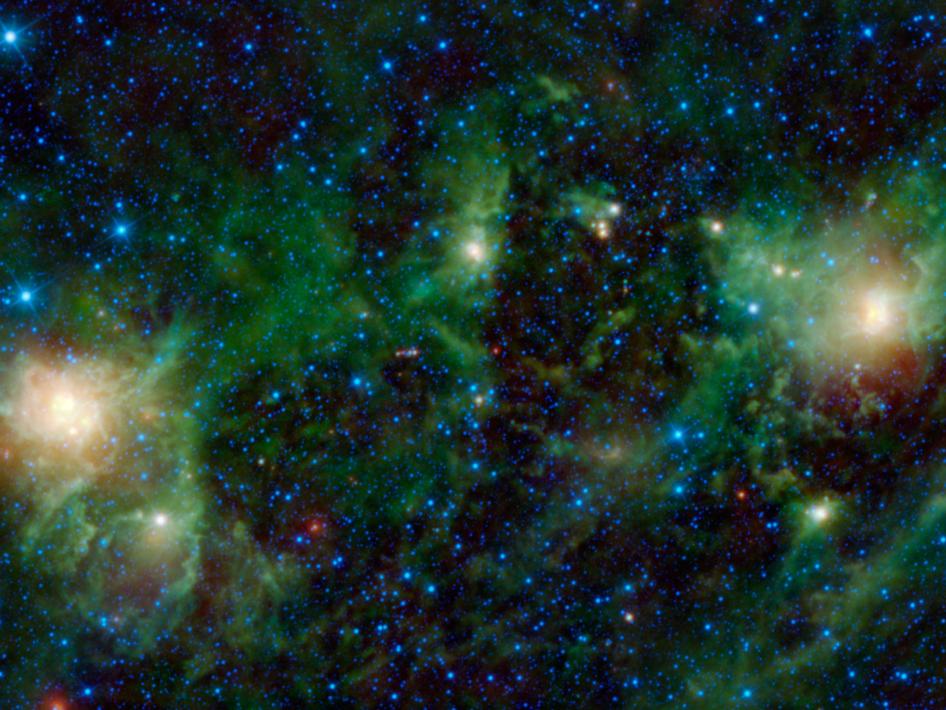 Nebulae - Not as Close as They Appear

This latest image from NASA's Wide-field Infrared Survey Explorer, or WISE, shows three different nebulae located in the constellation of Perseus. NGC 1491 is seen on the right side of the image, SH 2-209 is on the left side and BFS 34 lies in between. The picture covers an area on the sky equal to 8 full moons.

It is easy to think that celestial objects like the three in this image are located at the same distance from Earth, as if they were placed on the dome of a planetarium. In reality, objects that appear close together on the sky can actually be quite far apart. In this case, NGC 1491 and BFS 34 are part of the same cloud complex located at a distance of about 10,700 light-years away in the Perseus arm of the Milky Way Galaxy. SH 2-209 is farther away at about 16,000 light-years distance, located in the outer arm of the Milky Way. NGC 1491 can be seen in visible light with an optical telescope. In contrast, SH 2-209 disappears completely in visible light, obscured by dust.

Although they are not structurally associated with each other, the nebulae do have much in common. All three are members of the same "family" of objects called HII regions by astronomers. HII regions are created when ultraviolet radiation from hot stars ionizes the surrounding gas, causing it to glow in visible light. The surrounding dust is also heated by this radiation and we see it glow in infrared light. These regions are well known for being places where new stars are born. In this image, the star cluster [BDS2003] 65 is developing within the SH 2-206 nebula. The bright spot in the center of BFS 34 nebula is the growing star cluster [BDS2003] 63.

Color in this image represents specific wavelengths of infrared light. Blue and cyan (blue-green) represent wavelengths of 3.4 and 4.6 microns, respectively. In this image, most of the light emitted at these wavelengths is from hot stars. Green and red represent 12- and 22-micron light, which is mainly from warm dust.