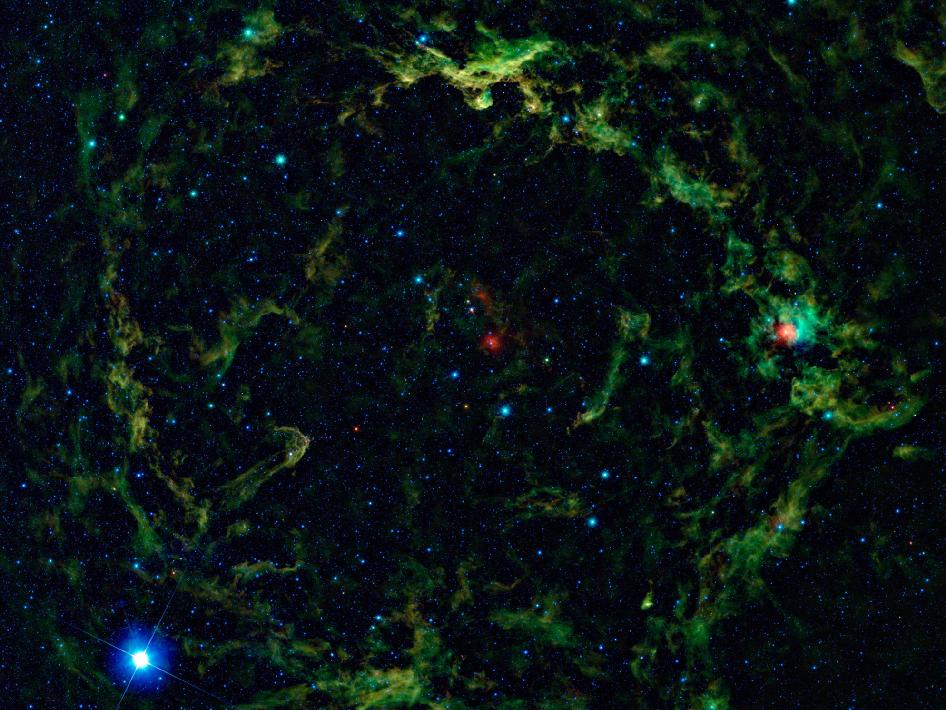 In Greek mythology, Orion was a hunter whose vanity was so great that he angered the goddess Artemis. As his punishment, Artemis banished the hunter to the sky where he can be seen as the famous constellation Orion. In the constellation, Orion's head is represented by the star Lamdba Orionis (fuzzy red dot in middle). When viewed in infrared light, NASA's Wide-field Infrared Survey Explorer, or WISE, shows a giant nebula around Lambda Orionis, inflating Orion's head to huge proportions.

Lambda Orionis is a hot, massive star that is surrounded by several other hot, massive stars, all of which are creating radiation that excites a ring of dust, creating the "Lambda Orionis molecular ring." Also known as SH 2-264, the Lambda Orionis molecular ring is sometimes called the Meissa ring. In Arabic, the star Lambda Orionis is known as "Meissa" or "Al-Maisan," meaning "the shining one." The Meissa Ring is of interest to astronomers because it contains clusters of young stars and proto-stars, or forming stars, embedded within the clouds. With a diameter of approximately 130 light-years, the Lambda Orionis molecular ring is notable for being one of the largest star-forming regions WISE has seen. This is also the largest single image featured by WISE so far, with an area of the sky approximately 10 by 10 degrees in size, equivalent to a grid of 20 by 20 full moons. Nevertheless, at less than one percent of the whole sky's area, it is just a taste of WISE data.

The bright blue star in the lower left corner of the image is the star Betelgeuse, which represents one shoulder of the hunter Orion. The name Betelgeuse is actually a corruption of the original Arabic phrase "Yad al-Jauza'," meaning "hand of the giant one." Betelgeuse is well known for being a red supergiant star, yet in WISE's infrared view it appears blue, as do most stars in WISE images. This is because most stars, including Betelgeuse, put out more light in the shortest infrared wavelengths of light captured by WISE, and those shorter wavelengths are presented in WISE images as blue and cyan.

In visible light, Orion's other shoulder is clearly marked by the variable star Bellatrix. In infrared light, however, Bellatrix is a somewhat unremarkable cyan-colored star in the right side of the image. In Latin, Bellatrix means "female warrior," which is perhaps why the name was chosen for a female witch character in the popular Harry Potter books.

Also seen in this image are two dark nebulae, Barnard 30 and Barnard 35, which are parts of the Meissa ring that are so dense they block out visible light. Barnard 30 is the bright knob of gas and dust in the top center part of the image. Barnard 35 appears as a hook extending towards the center of the ring just above and to the right of the star Betelgeuse. The bright reddish object seen to in the middle right part of the image is the star HR 1763, which is surrounded by another star-forming region, LBN 867.

Color in this image represents specific wavelengths of infrared light. Blue and cyan represent 3.4- and 4.6-microns, primarily light emitted by hot stars. Green and red represent 12- and 22-micron light, which is mainly radiation from warm dust.