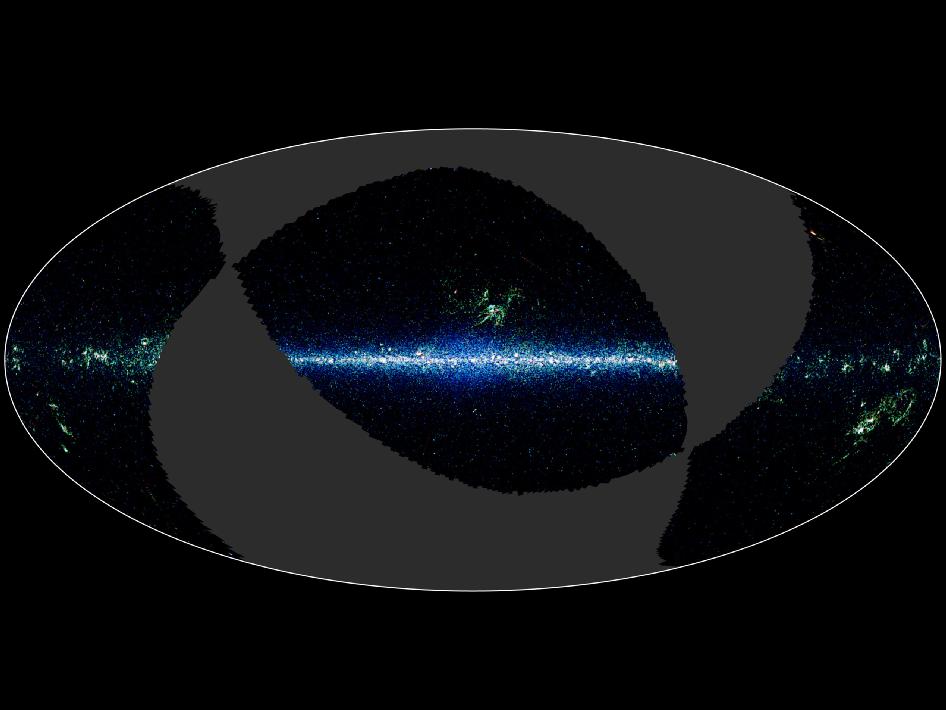 This image is a map of the portion of the sky covered by the preliminary release of WISE data. WISE surveyed the entire sky in four infrared wavelengths in 2010. On April 14, 2011, the WISE team released data representing 57 percent of the sky as seen by WISE. This preliminary release will allow astronomers and astronomy enthusiasts worldwide to explore the sky as seen by WISE.

The sky can be thought of as a sphere that surrounds us in three dimensions. To make a map of the sky, astronomers project it into two dimensions. Various methods are used to project 3-D objects into 2-D maps, but the projection used in this image of the sky is called Aitoff, named after the geographer who invented it. It takes the 3-D sky sphere and slices open one hemisphere, and then flattens the whole thing out into an oval shape. Any projection creates distortions, so people often pick the projection type based on which distortions they want to minimize. This map is centered on the Milky Way galaxy. The plane of the galaxy runs along the equator, and the middle of the galaxy is at the center of the map, where projection distortions are minimal.

The gray regions are the part of the sky not available in the preliminary WISE data release. For the regions with data, the colors used are representational: blue and cyan (blue-green) represent data from the 3.4- and 4.6-micron detectors aboard WISE, and green and red represent data from the 12- and 22-micron detectors. The blue and cyan reveals mostly light from stars, while the green and red come from mostly warm dust.