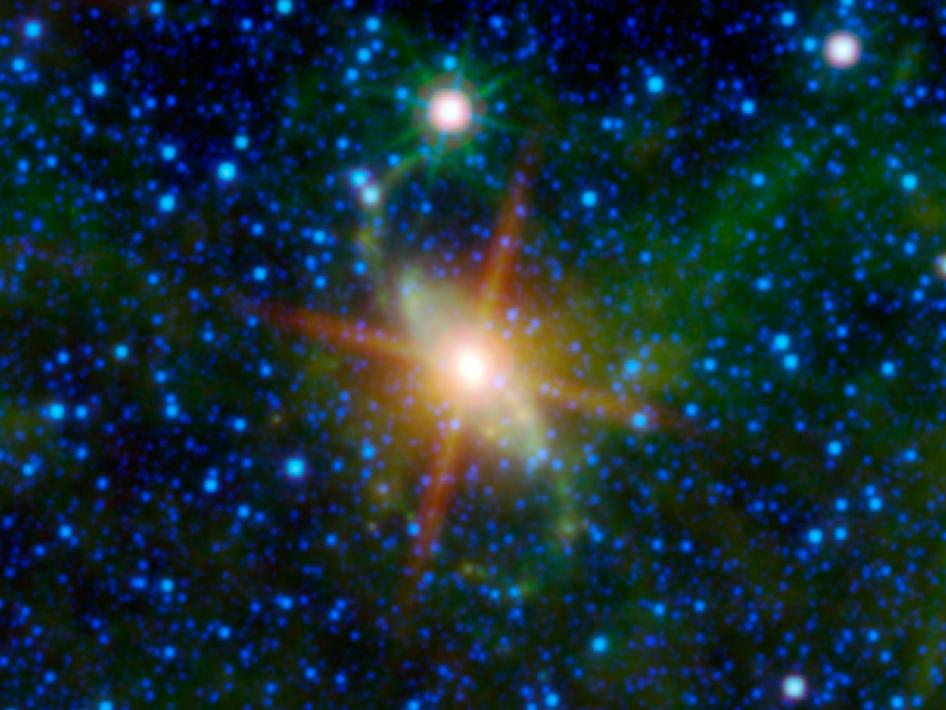 There's something special going on in the nearby Circinus galaxy, as revealed by this image from NASA's Wide-field Infrared Survey Explorer, or WISE. The Circinus galaxy is located in the constellation of Circinus and is obscured by the plane of our Milky Way galaxy. At a distance of 14 million light-years, it is one of the nearest galaxies, yet is largely unexplored because the Milky Way veils it. There are so many stars and so much dust from our own galaxy obscuring the Circinus galaxy. In fact, this galaxy has two extended spiral arms, which look like a great green "S" in this WISE image. These arms had not been seen until NASA's Spitzer Space Telescope and WISE observed them. The infrared wavelengths of light detected by these observatories pierce through the foreground dust of the Milky Way, revealing aspects of the special nature of the Circinus galaxy.

At the center of the "S," the core of the Circinus galaxy glows intensely in longer wavelengths of light (colored red in this WISE image). Circinus is what astronomers call an "active" galaxy, meaning a large fraction of its luminosity is coming from the core of the galaxy. All that luminous energy is believed to come from two sources. The first is probably a ring of star formation surrounding the core. Some recent gravitational disturbance induced the material around the core to begin collapsing and forming stars at an accelerated rate. Star formation makes a lot of dust, which is then heated and glows in infrared light. The other source is an active galactic nucleus, which is a supermassive black hole surrounded by a disk of matter that is slowly falling into the hole. That disk of matter contains a great deal of gas and dust. The material nearest the black hole is so hot that it produces intense X-ray and ultraviolet light. Dust further out in the disk absorbs much of that light, heating the dust and making it also glow in the infrared. Circinus contains the closest active galaxy nucleus to us.