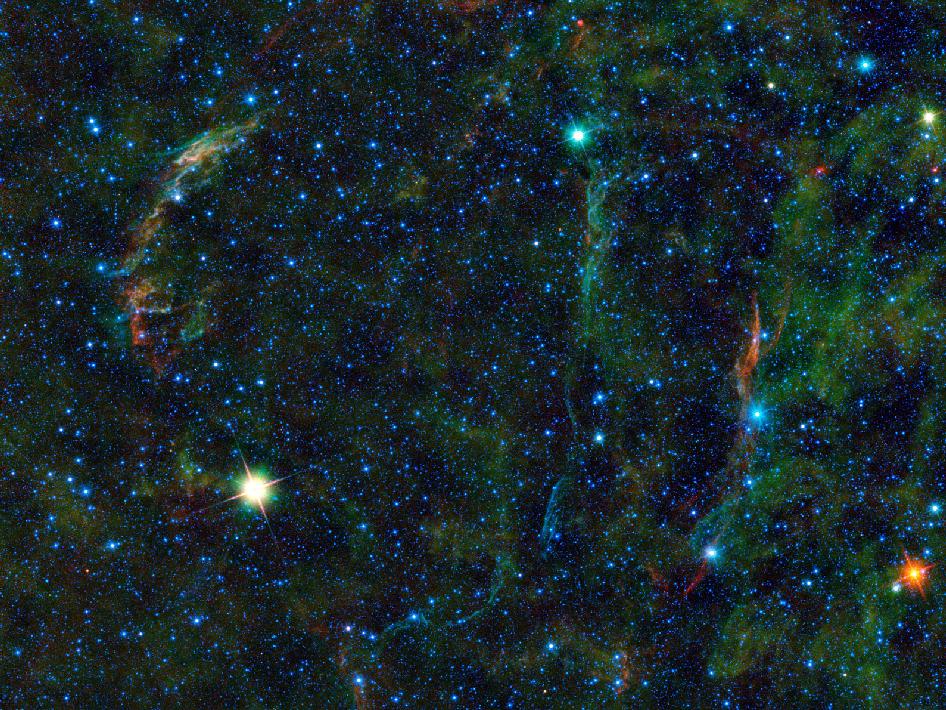 This large mosaic image from NASA's Wide-field Infrared Survey Explorer, or WISE, features the wreckage of an exploded star, as well as other stars nearing the end of their lives. The wispy, colorful arc-shaped features are remnants of the explosion, called a supernova.

Located in the constellation Cygnus, this supernova remnant, called the Veil nebula, was created when a massive star exploded some 5,000 to 8,000 years ago, sending out shock waves that continue to interact with the gas and dust between the stars. This is among the largest of the WISE images featured so far, covering an area equivalent to nearly nine by nine full moons.

The Veil nebula is the name that generally refers to the visible sections of the whole supernova remnant that was seen in its entirety in radio light and called the Cygnus Loop. The portion of the nebula to the right is known as the Witch's Broom nebula. It can be seen in this WISE image as a reddish, long, vertical wispy cloud of dust. The unrelated star 52 Cygni, seen in bright blue, appears to ride the nebula as if a witch on a broom.

The colors of the Veil nebula are the result of shock waves from the supernova energizing the gas and the dust in the region and making it glow across the electromagnetic spectrum. Some astronomers suggest that the Veil nebula represents not one, but two supernova remnants that are interacting with each other.

There are several noteworthy bright stars in the image. The bright yellow star to the left of center is the star UX Cygni, a giant star in the late stages of its life. UX Cygni varies in brightness every 565 days as its surface puffs up and falls back down. Such stars create a large amount of dust in their outer atmospheres as the star moves toward becoming what is called a planetary nebula, a dying star surrounded by its shed layers. The dust surrounding UX Cygni gives it the yellow appearance in this WISE image. Towards the top and a little to the right of the image is a bright cyan star, AM Cygni, which is another variable star nearing the end of its life. On the right edge of the image we see an unidentified bright orange object. It is possibly a red giant star that is also in the last phase of its life, casting off its atmosphere as it becomes a planetary nebula.