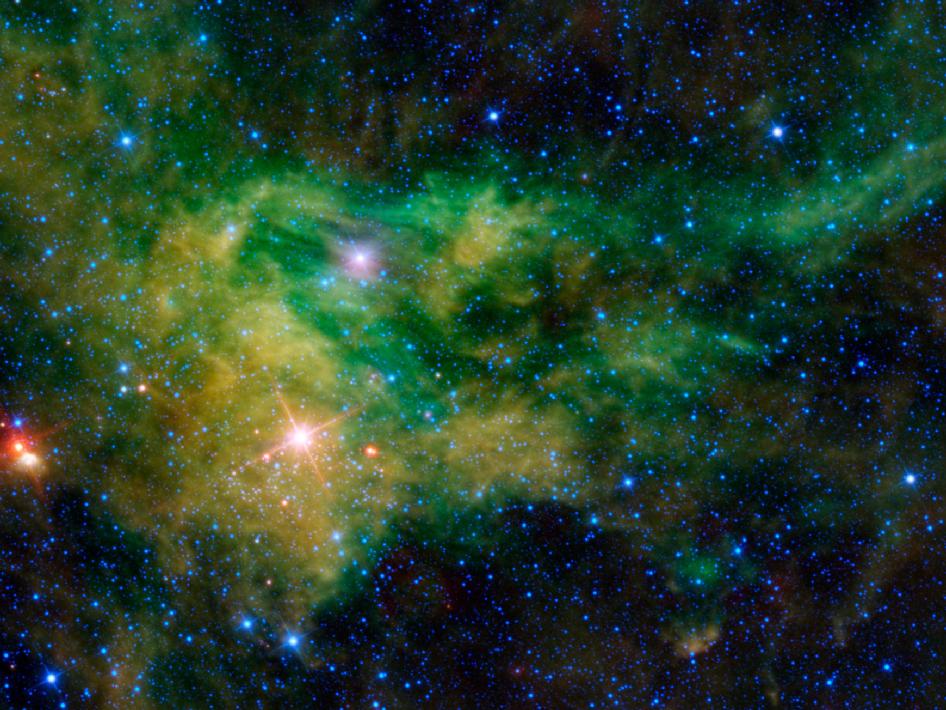 NASA's Wide-field Infrared Survey Explorer, or WISE, captured this colorful image of the nebula BFS 29 surrounding the star CE-Camelopardalis, found hovering in the band of the night sky comprising the Milky Way. Most of the gas and dust in this image cannot be seen directly in visible light, but WISE's detectors revealed exquisite new details, and even some hidden stars.

The nebulous interstellar gas and dust in this image is known as BFS 29. "BFS" stands for Blitz, Fich, and Stark -- the three astronomers who identified and catalogued 65 new star-forming regions in 1982 (the "29" simply means that it's the 29th object in their catalog). In visible light, BFS 29 can be seen, but only very slightly. This is because the dust scatters and reflects some of the light from nearby stars, hence its classification as a reflection nebula. The gas in BFS 29 also contains large amounts of ionized hydrogen -- referred to by astronomers as "H II." Hence, the nebula is also classified as an HII region. Reflection nebulae and HII regions are often associated with star formation.

Most of the illumination and energy in BFS 29 is likely provided by the star CE-Camelopardalis. The "CE" in its name comes from a complex naming system for variable stars. Camelopardalis is the name of the constellation in which it is found, and means giraffe in Latin (from a camel wearing a leopard's coat). Of the three brightest stars in this image, it is the bright pink-colored star nearest to the center of the image. The other two bright stars cannot be seen in visible light; they are hidden behind the clouds of gas and dust. In infrared light, however, they shine through brilliantly. CE-Camelopardalis is a variable supergiant star, which means it will eventually end its life in a supernova, likely leaving behind a black hole. It is near the giraffe's hind foot, making a sort of ankle bracelet, as compared to the emerald necklace featured in the Nov. 9, 2010 image.