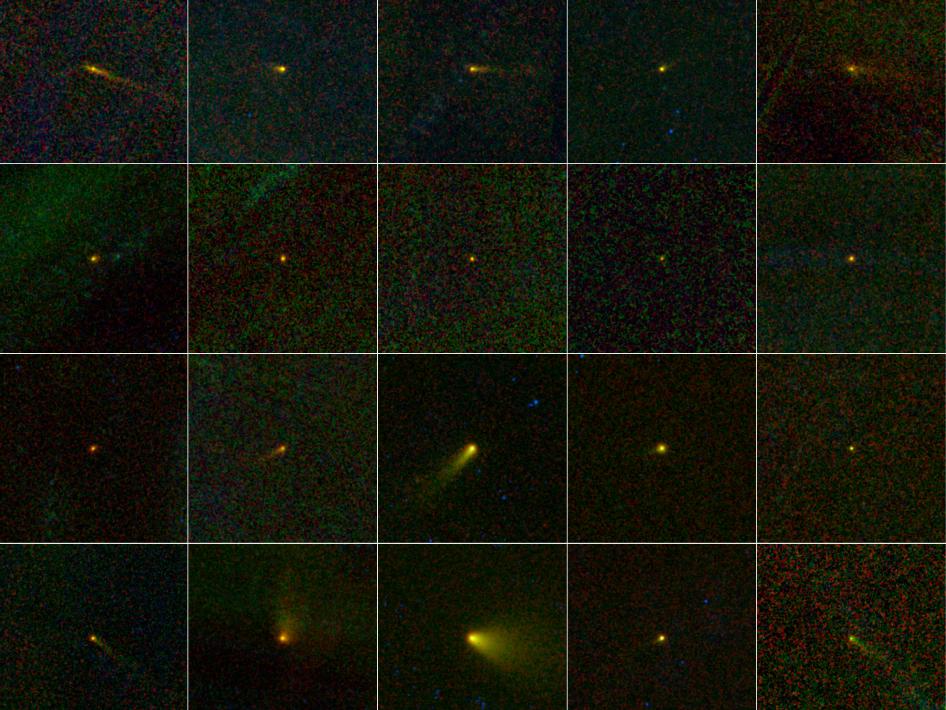 During its one-year mission, NASA's Wide-field Infrared Survey Explorer, or WISE, mapped the entire sky in infrared light. Among the multitudes of astronomical bodies that have been discovered by the NEOWISE portion of the WISE mission are 20 comets.

This collage shows those 20 new comets all together in a kind of family portrait. Most of the comets are named WISE. In three cases, the comet does not bear the name WISE because the object was known before to be an asteroid. The WISE observations revealed their true nature. These objects did not turn out to be stony and/or metallic space rocks as is the case for asteroids. Instead, they were shown to be comets -- snowy dust balls with clouds of dust and gas surrounding them.

When most people think of comets, they think of the popular images of Halley's Comet or Comet Hale-Bopp, with bright, enormous tails. A comet tail forms as the object travels closer to the sun. The ices in the comet are heated and become a gas, escaping the surface of the comet and lifting dust particles away as well. This fuzzy cloud around the comet nucleus is called a coma. As a comet gets closer and closer to the sun, the solar wind and sunlight push the coma away, forming the long tail.

The fuzzy background in each picture is due to random fluctuations in infrared light, primarily from dust in our own solar system. Stars cannot be seen because they are subtracted out during the process of combining multiple WISE pictures together to make this view centered on the moving comets.

The colors in the pictures are representational. Infrared light of 4.6, 12 and 22 microns is colored blue, green and red, respectively. The light emitted from comets in infrared is due to their temperatures, so the cooler objects appear to have more red, while warmer objects will appear more bluish.