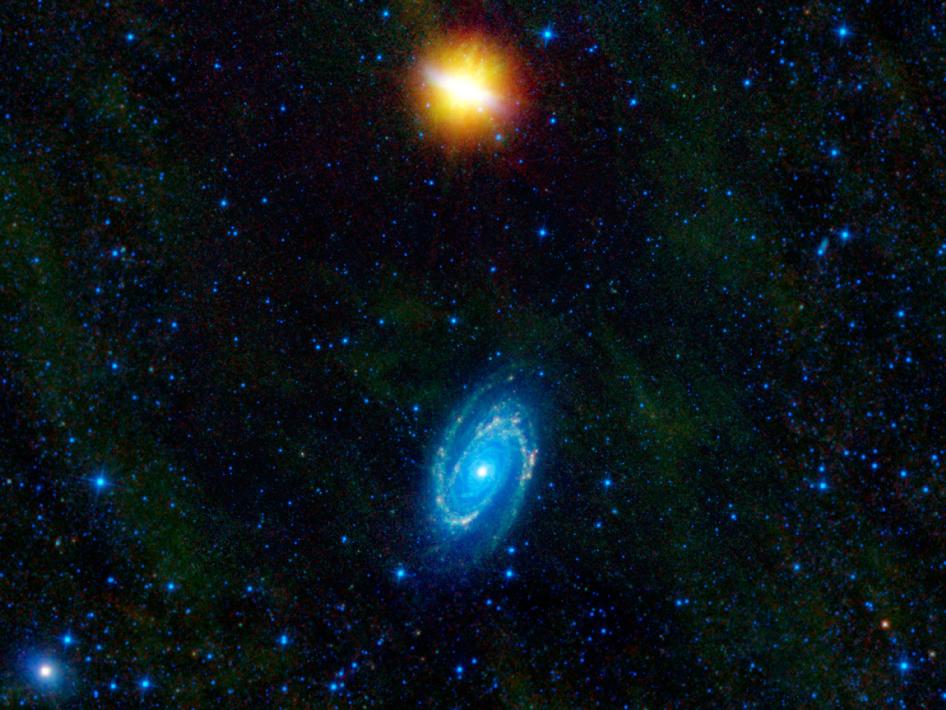 This image from NASA's Wide-Field Infrared Survey Explorer, or WISE, features two stunning galaxies engaged in an intergalactic dance. The galaxies, Messier 81 and Messier 82, swept by each other a few hundred million years ago, and will likely continue to twirl around each other multiple times before eventually merging into a single galaxy. The relatively recent encounter triggered a spectacular burst of star formation visible in both galaxies.

Messier 81 (bottom of image) is a prototypical "grand design" spiral galaxy with its pronounced and well-defined arms spiraling into its core. At the wavelengths WISE sees, these beautiful arms show areas of compressed interstellar gas and dust, which go hand-in-hand with areas of increased star formation. The spiral density waves that create this compression and star formation have been enhanced by the close gravitational interaction with its partner galaxy, Messier 82, causing the arms to appear more prominent than what is typically seen in other isolated spiral galaxies.

Messier 82 (top of image) is also a spiral galaxy. However, it is seen edge-on from our point of view. It was originally classified as an irregular galaxy, until 2005, when astronomers were able to tease out spiral structure in near-infrared images (similar to wavelengths that WISE sees). Viewed in visible wavelengths, this galaxy appears to have a long thin bar shape, hence its common name, the Cigar Galaxy.

Messier 82 is also a starburst galaxy, meaning it is currently forming stars at an exceptionally high rate. This huge burst of activity was caused by its close encounter with Messier 81, whose gravitational influence caused gas near the center of Messier 82 to rapidly compress. This compression triggered an explosion of star formation, concentrated near the core. The intense radiation from all of the newly formed massive stars creates a galactic "superwind" that is blowing massive amounts of gas and dust out perpendicular to the plane of the galaxy. This ejected material (seen as the orange/yellow areas extending up and down) is made mostly of polycyclic aromatic hydrocarbons, which are common products of combustion here on Earth. It can literally be thought of as the smoke from the cigar.

A third, smaller galaxy, NGC 3077, can be seen at lower left. This spiral galaxy belongs to the same group as Messier 81 and Messier 82 -- a group that includes at least a dozen gravitationally linked galaxies. NGC 3077 is also experiencing a burst of new star birth, likely triggered by its interaction with Messier 81.