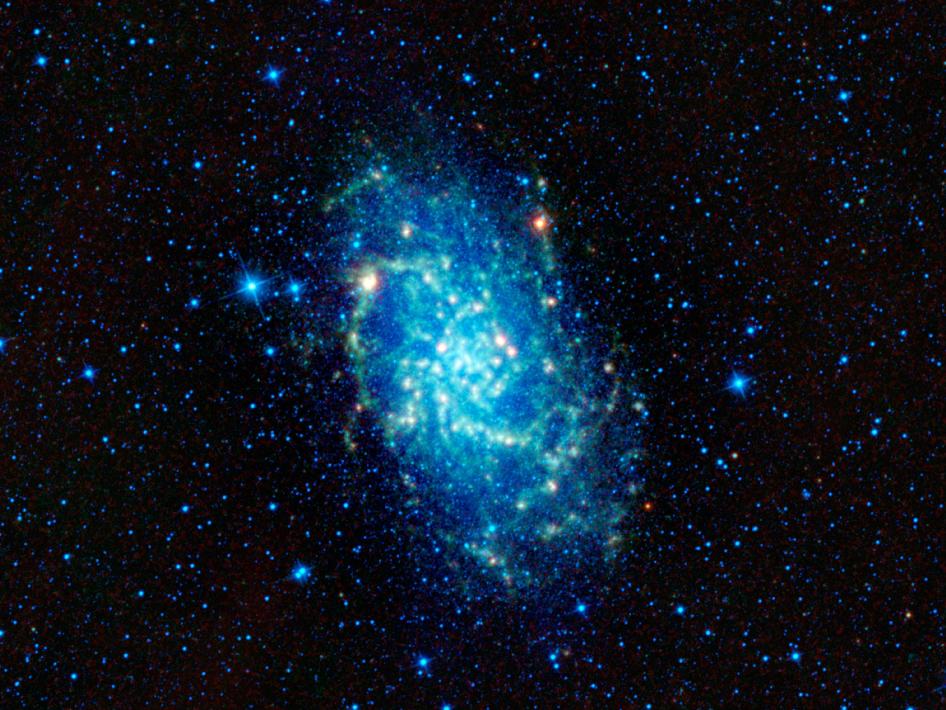 This image captured by NASA's Wide-field Infrared Survey Explorer, or WISE, shows of one of our closest neighboring galaxies, Messier 33. Also named the Triangulum galaxy (after the constellation it's found in), M33 is one of largest members in our small neighborhood of galaxies -- the Local Group. The Local Group consists of about 30 galaxies that are gravitationally bound and travel together through the universe. M33 is the third largest member of the Local Group, dwarfed only by the Andromeda galaxy (M31) and our very own home galaxy, the Milky Way.

M33 is extremely close as far as galaxies go, residing only 3 million light-years away. Its proximity, along with it being conveniently tilted towards Earth (about 54 degrees to the line of sight), make it very easy for astronomers to study in detail. The infrared images that WISE produces contribute to astronomers' overall understanding of a variety of processes happening in the galaxy. Areas in the spiral arms that are hidden behind dust in visible light shine through brightly in infrared light, showing where clouds of cool gas are concentrated. Star-forming regions are easy to spot in infrared (green and red areas in this image). Notice that there isn't a lot of star formation occurring near the center of M33. It would be difficult to deduce this lack of activity in the core by only looking a visible-light image, where the core appears to be the brightest feature. This infrared image also shows that the galaxy is surprisingly bigger than it appears in visible light. The cold dust seen by WISE extends much further out from the core than anticipated.

The bright yellow-orange 'blobs' scattered throughout M33 are areas where stars are forming at an especially intense rate. The largest one in the spiral arm to the upper left has its own name, NGC 604. It's an "H II" region -- an area of gas that is being heated and ionized by powerful young stars recently born inside of it. The Orion nebula is an example of a nearby H II region within our own Milky Way galaxy. NGC 604, however, is the largest such region in the entire Local Group of galaxies. It is over 40 times larger than the Orion nebula and much brighter. If NGC 604 were at the same distance from Earth as the Orion nebula, it would be the brightest object in the night sky (besides the moon)

M33 is over 50,000 light years across (about half the size of the Milky Way). Because it is so close it appears quite large to us, covering a piece of sky nearly four times bigger than the full moon. Its relatively low surface brightness makes it difficult for human eyes to see, however. Even so, under exceptionally dark skies it can be seen with the unaided eye, making it one of the farthest objects visible without a telescope.