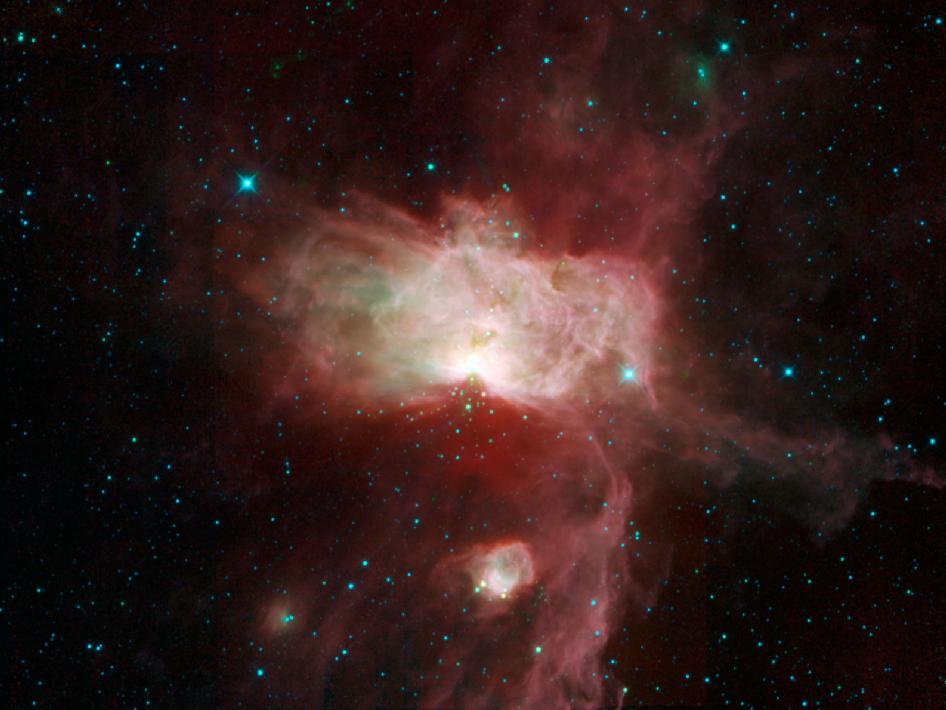 A Flame in Orion's Belt

This mosaic image taken by NASA's Wide-field Infrared Survey Explorer, or WISE, features three nebulae that are part of the giant Orion Molecular Cloud. The image covers an area of the sky about three times as high and wide as the full moon (1.5 by 1.8 degrees). Included in this view are the Flame nebula, the Horsehead nebula and NGC 2023.

Despite its name, there is no fire roaring in the Flame nebula. What makes this nebula shine is the bright blue star seen to the right of the central cloud. This star, Alnitak, is the easternmost star in Orion's belt. Wind and radiation from Alnitak blasts away electrons from the gas in the Flame nebula, causing it to become ionized and glow in visible light. The infrared glow seen by WISE is from dust warmed by Alnitak's radiation. Also known as NGC 2024 and Orion B, this nebula is classified as a molecular cloud.

The famous Horsehead nebula appears in this image as a faint bump on the lower right side of the vertical dust ridge. In visible light, this nebula is easily recognizable as a dramatic silhouette in the shape of a horse's head. It is classified as a dark nebula because the dense cloud blocks out the visible light of the glowing gas behind it. WISE's infrared detectors can peer into the cloud to see the glow of the dust itself.

A third nebula, called NGC 2023, can be seen as a bright circle in the lower half of the image. NGC 2023 is classified as a reflection nebula, meaning that the dust is reflecting the visible light of nearby stars. But here WISE sees the infrared glow of the warmed dust itself.

This image was made from data collected after WISE began to run out of its supply of solid hydrogen cryogen in August 2010. Cryogen is a coolant used to make infrared detectors more sensitive. WISE mapped the entire sky by July using four infrared detectors, but during the period from August to October, 2010, while the cryogen was depleting, WISE had only three detectors operational, and the 12-micron detector was less sensitive. This turned out to be a good thing in the case of this image, because the less-sensitive detector reduced the glare of the Flame portion of the nebula enough to bring out details of the rest of the nebula.