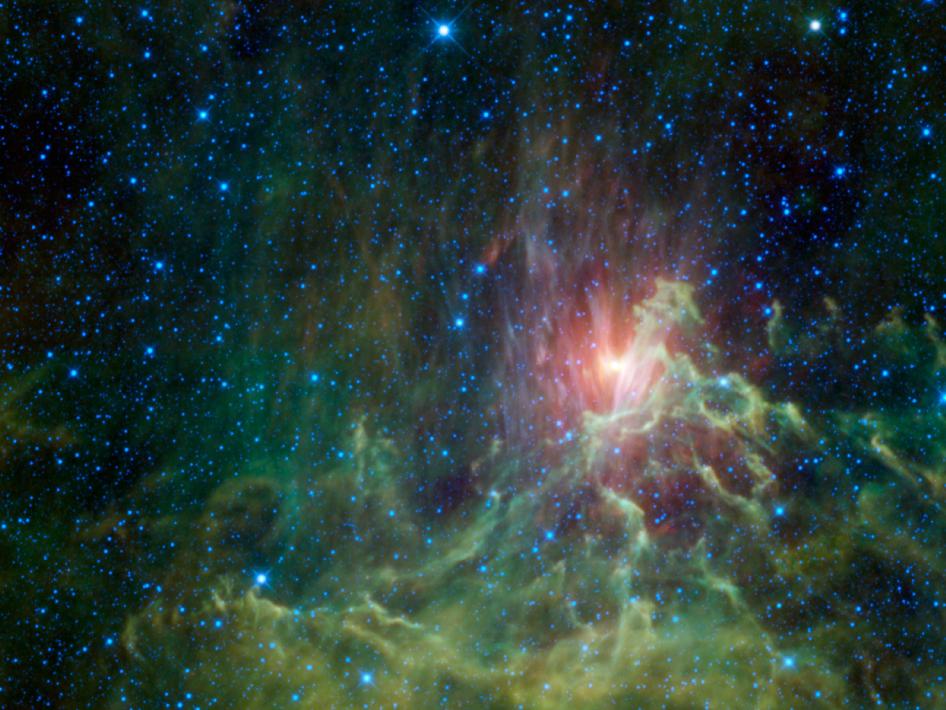 NASA's Wide-field Infrared Survey Explorer, or WISE, captured this view of a runaway star racing away from its original home. Seen here surrounded by a glowing cloud of gas and dust, the star AE Aurigae appears to be on fire. Appropriately, the cloud is called the Flaming Star nebula.

A runaway star is one that is hurled into high-speed motion through a supernova explosion or encounter with nearby stars. Like an angry teenager who storms out of the house after a family fight, runaway stars are ejected from their birthplace and race off to other parts of the galaxy.

The runaway star AE Aurigae was likely born in the Trapezium cluster, which is located in the constellation Orion. It formed as a binary-star system with the star Mu Columbae. Approximately 2.5 million years ago, these two stars are thought to have collided with another binary-star system in the Trapezium Cluster. This collision sent both AE Aurigae and Mu Columbae hurtling through space in opposite directions at a speed of 100 kilometers per second (over 200,000 miles per hour). Today, AE Aurigae can be seen in the constellation Auriga hundreds of light-years to the north of its home, while its former companion Mu Columbae is located hundreds of light-years to the south in the constellation Columba.

The wind from AE Aurigae blows away electrons from the gas surrounding it. This ionized gas begins to emit light, creating what is known as an emission nebula. The star also heats up nearby dust, causing it to glow in infrared wavelengths. As seen in visible light, this dust reflects the light of nearby stars, so it is called a reflection nebula.