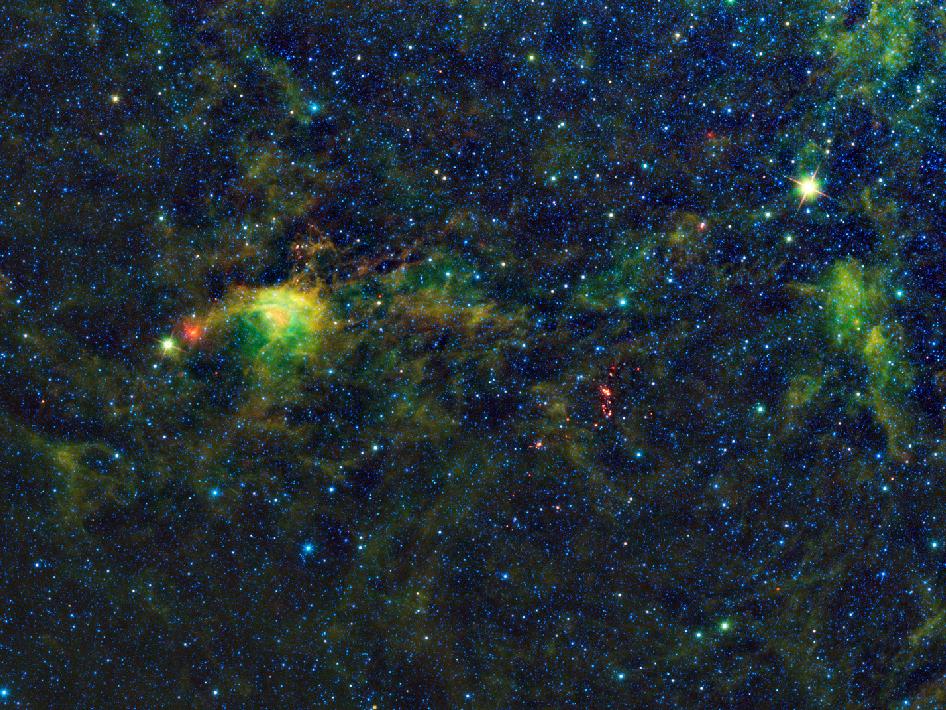 The Wide-Field Infrared Survey Explorer, or WISE, has uncovered a striking population of young stellar objects in a complex of dense, dark clouds in the southern constellation of Circinus. This mosaic from WISE covers an area on the sky so large that it could contain a grid of 11 by 7 full moons. The cloud itself is some 2,280 light-years away and spans more than 180 light-years across.

When an interstellar cloud becomes dense and cool enough, molecules can form in it, so astronomers call these molecular clouds. Molecular clouds are where stars first form, and astronomers study them hoping to learn about the earliest stages in the lives of stars. These clouds are so dense that the dust within blocks visible wavelengths of light. Telescopes that see visible light only detect ghostly dark patches in the sky, called dark nebulae. The infrared vision of WISE was able to pierce through the cloud and see the light of the dust itself and newly forming stars within.

In the western part of the cloud (right of the image center) there is a prominent cluster of red-colored sources. This is light coming from large amounts of warm, concentrated dust. These are what astronomers call young stellar objects, stars so new that they have yet to begin nuclear fusion in their cores and are enveloped by cocoons of dust. These young stars also power large-scale outflows of gas that are detected by radio telescopes. As these young stars develop, they will emerge from their cocoons and begin to light up their surroundings, making the Circinus cloud shine in visible light.

Also in this image: the brightest star in the upper-right is IRAS 14484-6152, a giant star rich in carbon. The red object to the east (left) of the brightest nebulosity is an O-type star. It derives its red color from the surrounding dust, which is being heated by this massive star.