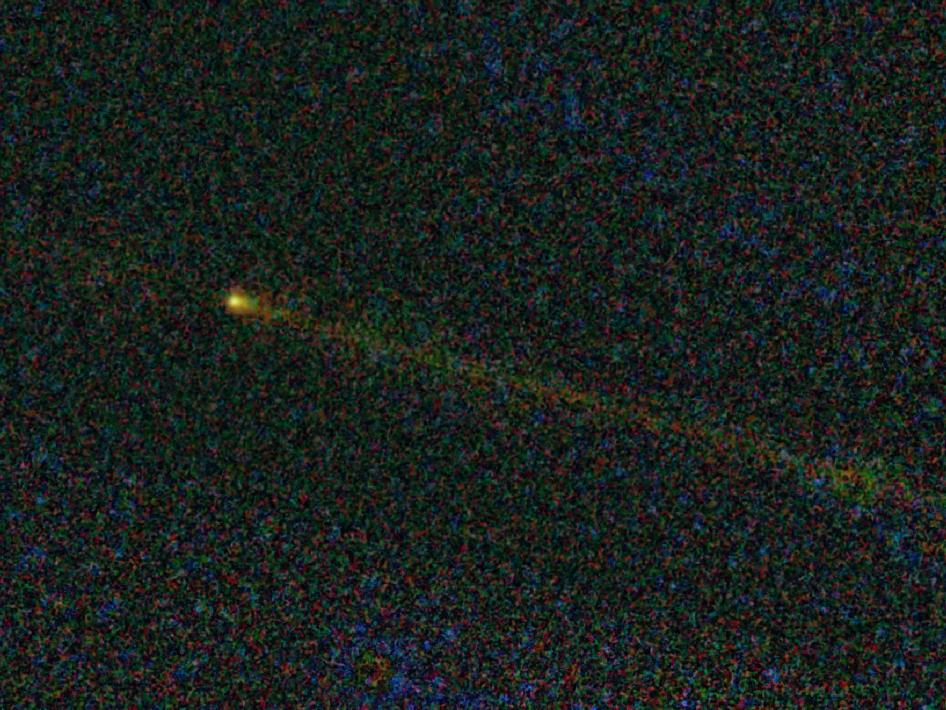 Icy Visitor from Beyond

The comet, known officially as 103P/Hartley was discovered fairly recently, in 1986, by Malcolm Hartley in Siding Spring, Australia. It probably originated from an icy orbit close to that of Jupiter's, before something knocked it on a path toward the sun. The comet circles the sun every 6.46 years -- its upcoming closest approach to the sun, called perihelion, will take place on Oct. 28, 2011. EPOXI, which utilizes the already "in flight" Deep Impact flyby spacecraft, will reach the comet on Nov. 4.

The WISE observations are helping the EPOXI team gain a more comprehensive picture of the comet's behavior over time. This image, taken on May 10, 2010, provides the most extensive look yet at the comet's dusty trail -- a path of particles, sort of like a trail of crumbs, that the comet leaves during each of its trips through the inner solar-system. The extent of the trail seen in this view, behind the comet, is 1.8 million kilometers, or 1.1 million miles.

WISE's infrared vision also makes it good at studying the range of dust particle sizes in the trail, as well as the comet's tail, seen here as a fuzzy streak to the right of the comet, in line with the trail. Infrared observations are also useful for measuring the comet's nucleus and rotation rate.

The fuzzy background in this picture is noise, primarily from dust in our own solar system. Stars cannot be seen because they are subtracted out during the process of averaging multiple WISE pictures together into this one view.

Infrared light of 4.6, 12 and 22 microns is colored blue, green and red, respectively.