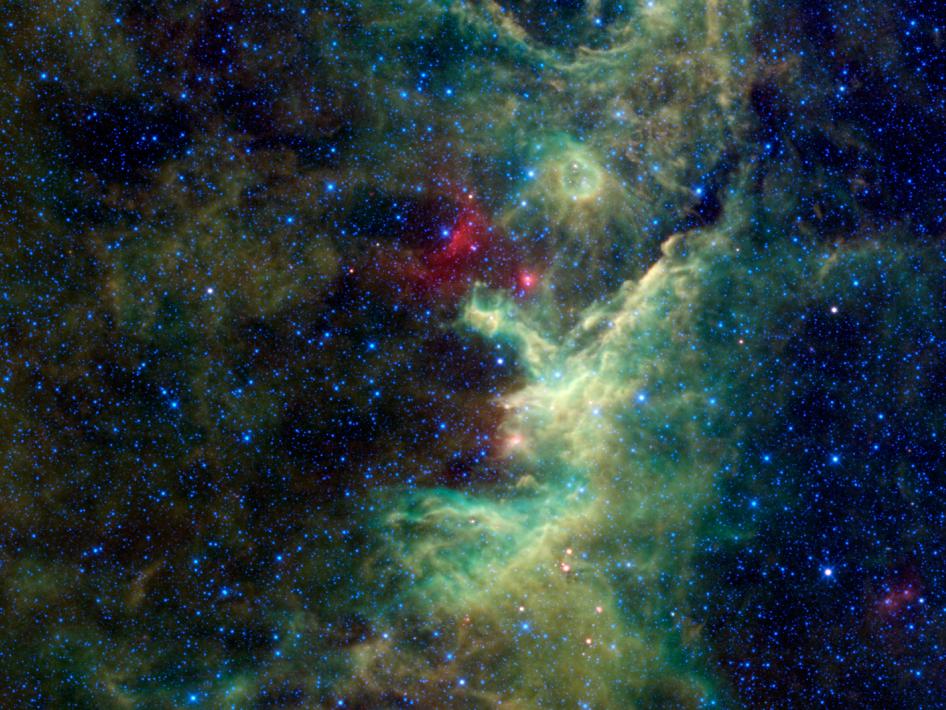 The Dark Heart of the King

NASA's Wide-field Infrared Survey Explorer, or WISE, captured this image of a hidden star-forming cloud of dust and gas located in the constellation of Cepheus. Cepheus, father of Andromeda, was a mythological king in the ancient Greek world. This image of dark nebulae lies near the heart of the king, as imagined by ancient Greek astronomers.

The dust in these nebulae blocks visible light passing through, and the cloud and its contents are mostly hidden when viewed in visible light. What appears to the naked eye as the blackness of space is in fact a dark nebula. WISE's infrared vision both penetrates the dust to see stars within the cloud as well as the glow of the dust that makes up the cloud.

Different parts of this nebula have a variety of names in astronomical catalogs. The central portion is known as IRAS 22298+6505. IRAS stands for Infrared Astronomical Satellite, a predecessor to WISE and an international satellite that mapped the sky in infrared light in the 1980s. Other portions of this cloud are called TGU H686 P2 and LDN 1213. As with IRAS, the first letters of these objects refer to astronomical catalogs. TGU is an acronym for the Tokyo Gakugei University catalog, while LDN stands for Lynds Dark Nebula catalog. The surveys that produced these catalogs were often done with fields of view that were much smaller than WISE's. What looked like distinct nebulae in those surveys are revealed as a much larger cloud complex by WISE. This complex spans about 120 light-years across and is located about 2,500 light-years away at the edge of a spiral arm of the Milky Way galaxy, called the Orion spur.

These types of clouds are the locations where stars are born. When a cloud of dust and gas becomes so dense that it can block out light, it is ripe for parts of the cloud to collapse into newborn stars. The whole cloud doesn't form stars all at one time. Some parts of the cloud go first, and the winds and radiation from the biggest and hottest stars in that first generation will blow away parts of the cloud and compress other parts causing further star formation to occur. The bright blue giant star, 26 Cephei, is an example. Seen in the upper central part of this image, 26 Cephei is surrounded by a bubble of cool, red dust and dust-enshrouded younger stars that may owe their existence to their older sibling.