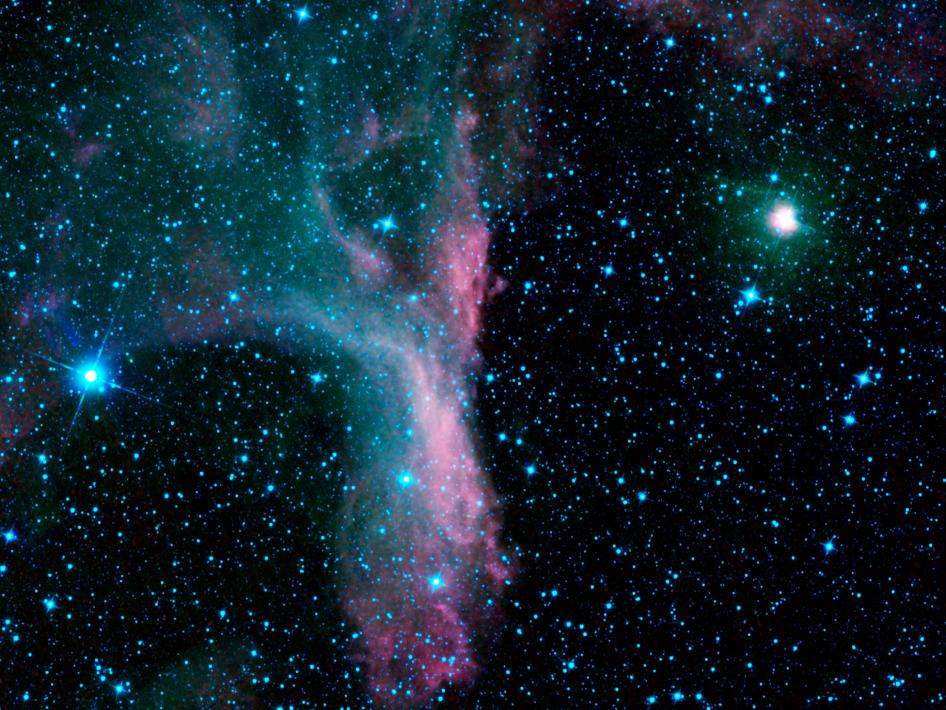 In the Grip of the Scorpion's Claw

Gripped in the claw of the constellation Scorpius sits the reflection nebula DG 129, a cloud of gas and dust that reflects light from nearby, bright stars. This infrared view of the nebula was captured by NASA's Wide-field Infrared Survey Explorer, or WISE.

Viewed in visible light, this portion of the sky seems somewhat unremarkable. But in infrared light, a lovely reflection nebula is revealed. DG 129 was first catalogued by a pair of German astronomers, named Johann Dorschner and Josef Gürtler, in 1963.

Much like gazing at Earth-bound clouds, it is fun to use your imagination when looking at images of nebulae. Some people see this nebula as an arm and hand emerging from the cosmos. If you picture the "thumb" and "forefinger" making a circle, it is as though you are seeing a celestial "okay" sign.

The bright star on the right with the greenish haze is Pi Scorpii. This star marks one of the claws of the scorpion in the constellation Scorpius. It is actually a triple-star system located some 500 light-years away. Perhaps a cross-species celestial handshake is imminent?

The colors used in this image represent different wavelengths of infrared light. The image was constructed from frames taken after WISE ran out of some of the coolant needed to chill its infrared detectors and began to warm up. The WISE detector sensitive to 22-micron light has become too warm to produce good images, but the three shorter wavelength detectors continue to crank out over 7,000 pictures of the sky every day, like the ones that make up this picture. Blue represents infrared radiation at 3.4 microns, while green represents light with a wavelength of 4.6 microns. Red represents 12-micron infrared light.