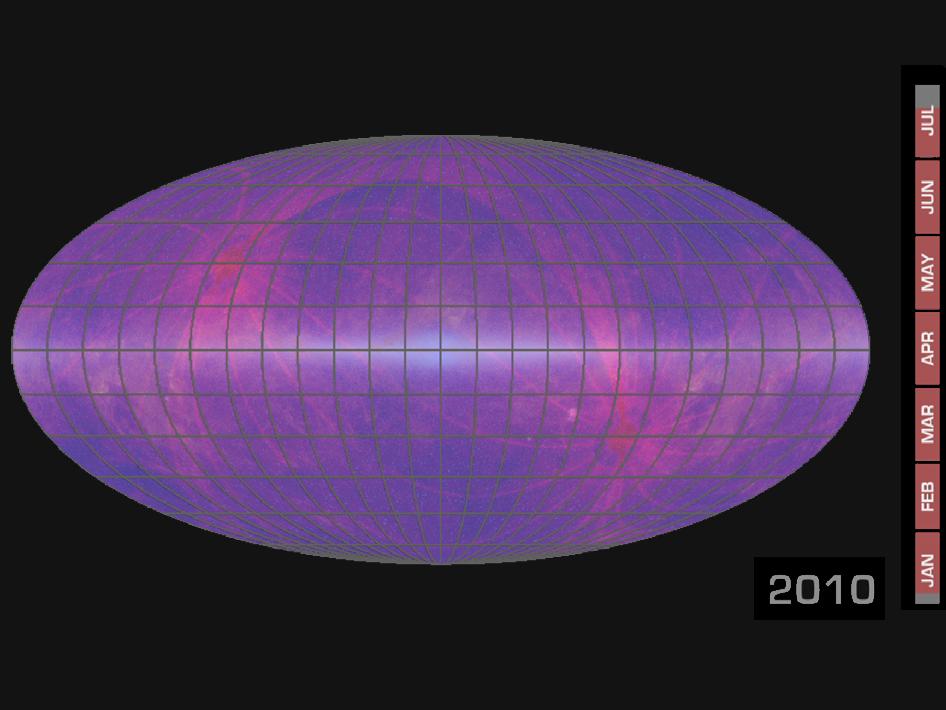 › See animation This animation shows the progress of the WISE all-sky survey over time. WISE, or NASA's Wide-field Infrared Survey Explorer, is perched up in the sky like a wise, old owl, scanning the whole sky one-and-a-half times in infrared light. On July 17, 2010, it will have completed its first scan of the entire sky, delivering more than one million image frames so far. The animation begins with an all-sky infrared map consisting of data taken by previous missions: the Infrared Astronomical Satellite; NASA's Cosmic Background Explorer; and the Two-Micron All-Sky Survey. The map is then filled in to show the sky areas WISE scanned over time. Red indicates regions with the greatest coverage, and blue the least. The poles received the most coverage because WISE orbits Earth around the poles, scanning out strips of sky as Earth moves around the sun. The red lines between the poles show areas that received extra coverage because of the mission's strategy to avoid the moon. When the moon is in WISE's field of view, about twice every month, the space telescope captures the region it blocks, by first moving ahead of the moon and then behind it. This results in overlapped coverage for certain slices of sky. During this first all-sky scan, every point was covered by at least eight image frames. The Infrared Astronomical Satellite was a joint project of the United States, United Kingdom and the Netherlands. The Two-Micron All-Sky Survey was a project of NASA; the National Science Foundation; the University of Massachusetts, Amherst; and the California Institute of Technology, Pasadena, Calif. Image credit: NASA/JPL-Caltech/UCLA › See animation