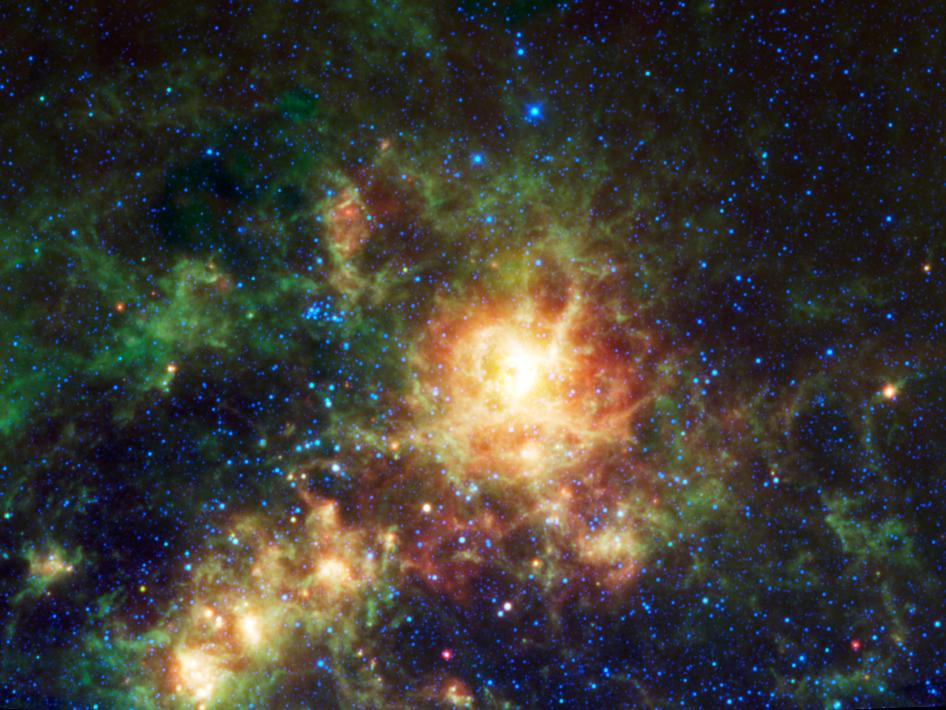 Sending chills down the spine of all arachnophobes is the Tarantula nebula, seen in this image from NASA''s Wide-field Infrared Survey Explorer (WISE). Located in the southern constellation of Dorado, the Tarantula nebula is a giant star-forming region in the Large Magellanic Cloud galaxy. This irregular dwarf galaxy orbits our Milky Way galaxy. It is relatively close, in galactic terms, at about 160,000 light-years away from Earth. Its motion around the Milky Way causes compression of interstellar dust and gas at is leading edge. This has led to a huge burst of star formation, creating the Tarantula nebula. At about 1,900 light-years across, the nebula is the largest star-forming region known in our entire Local Group of galaxies, a region encompassing over 30 galaxies, including the great Andromeda. In 1987, the closest supernova observed since the invention of the telescope was seen at the edge of the Tarantula nebula (SN1987A). It was determined to be the violent explosion of a very massive star. All four infrared detectors aboard WISE were used to make this mosaic. The image spans an area of 1.4 x 1.2 degrees on the sky or about three times as wide as the full moon, and 2.5 times as high. Color is representational: blue and cyan represent infrared light at wavelengths of 3.4 and 4.6 microns, which is dominated by light from stars. Green and red represent light at 12 and 22 microns, which is mostly light from warm dust. Image credit: NASA/JPL-Caltech/UCLA