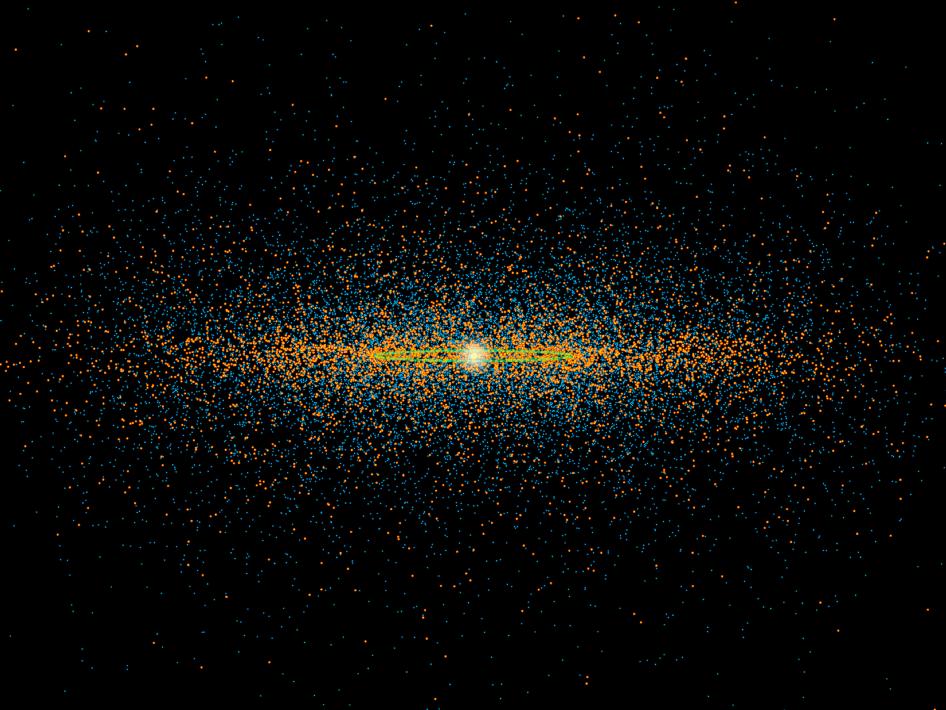 New results from NASA's NEOWISE survey find that more potentially hazardous asteroids, or PHAs, are closely aligned with the plane of our solar system than previous models suggested. PHAs are the subset of near-Earth asteroids (NEAs) with the closest orbits to Earth's orbit, coming within 5 million miles (about 8 million kilometers). They are also defined as being large enough to survive passage through Earth's atmosphere and cause damage on a regional, or greater, scale.

This diagram shows an edge-on view of our solar system. The dots represent a snapshot of the population of NEAs and PHAs that scientists think are likely to exist based on the NEOWISE survey. Positions of a simulated population of PHAs on a typical day are shown in bright orange, and the simulated NEAs are blue. Earth's orbit is green.

The diagram shows that the orbits of the PHAs tend to be more closely aligned with the plane of our solar system, or less tilted above and below the plane, than the NEAs. This characteristic of PHAs was known before the NEOWISE survey. Now, NEOWISE has found the PHAs to be about twice as likely to have these "lower-inclination" orbits than previously thought.

To make these estimates, the NEOWISE project observed a small portion of the total PHA and NEA populations. The survey not only looked at the objects' orbits but also their total numbers and physical properties such as size. The latest results provide the best count yet of the total PHA population, finding about 4,700 plus or minus 1,500, with diameters larger than 330 feet (about 100 meters). These numbers are in loose agreement with prior, rougher predictions. The NEOWISE team estimates that about 20 to 30 percent of the PHAs thought to exist have actually been discovered to date.

In an earlier study, NEOWISE estimated that there are about 20,500 near-Earth asteroids larger than 330 feet, fewer than previous estimates.

NEOWISE is the asteroid-hunting portion of NASA's Wide-field Infrared Survey Explorer, or WISE, mission, which scanned the entire sky twice in infrared light before entering hibernation mode in 2011.