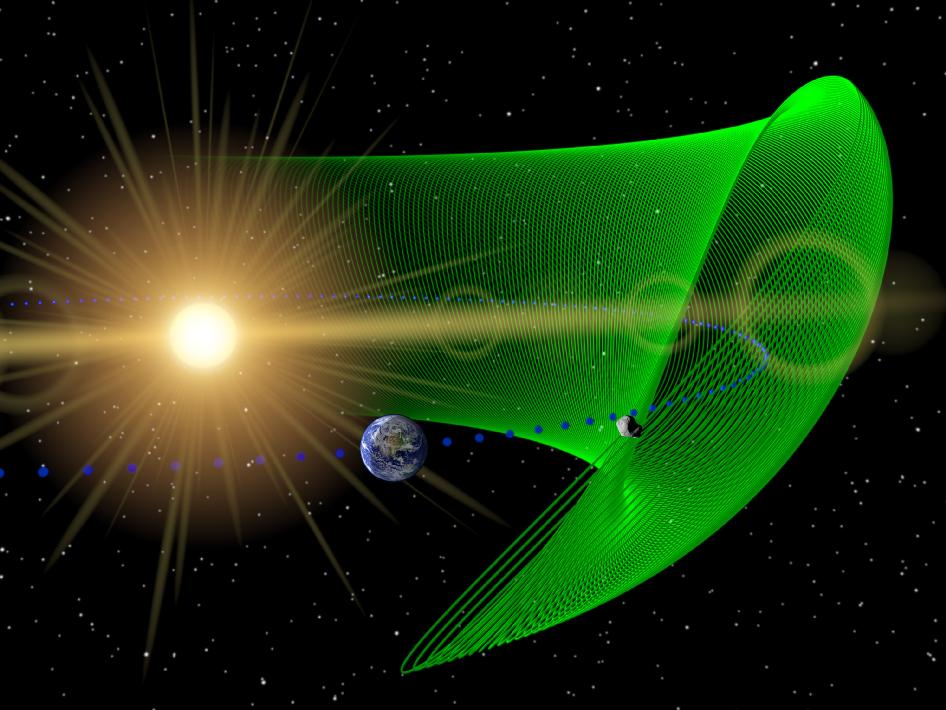 This artist's concept illustrates the first known Earth Trojan asteroid, discovered by NEOWISE, the asteroid-hunting portion of NASA's WISE mission. The asteroid is shown in gray and its extreme orbit is shown in green. Earth's orbit around the sun is indicated by blue dots. The objects are not drawn to scale.

Trojans are asteroids that share an orbit with a planet, circling around the sun in front of or behind the planet. Because they ride in the same orbit as a planet, they never cross its path, and never collide with the planet. They circle around stable gravity wells, called Lagrange points.

In the case of 2010 TK7, it has an extreme orbit that takes it far above and below the plane of Earth's orbit. The asteroid's orbit is well defined and for at least the next 100 years, it will not come closer to Earth than 15 million miles (24 million kilometers).

Typically, Trojan asteroids, for example those that orbit with Jupiter, don't travel so far from the Lagrange points. They stay mostly near these points, located where the angle between the sun and Earth is 60 degrees. Asteroids near a comparable position with respect to Earth would be very difficult to see, because they would appear near the sun from our point of view.

WISE was able to spot 2010 TK7 because of its eccentric orbit, which takes it as far as 90 degrees away from the sun. WISE surveyed the whole sky from a polar orbit, so it had the perfect seat to find 2010 TK7. Follow-up observations with the Canada-France-Hawaii Telescope on Mauna Kea, Hawaii, helped confirm the object's Trojan nature.