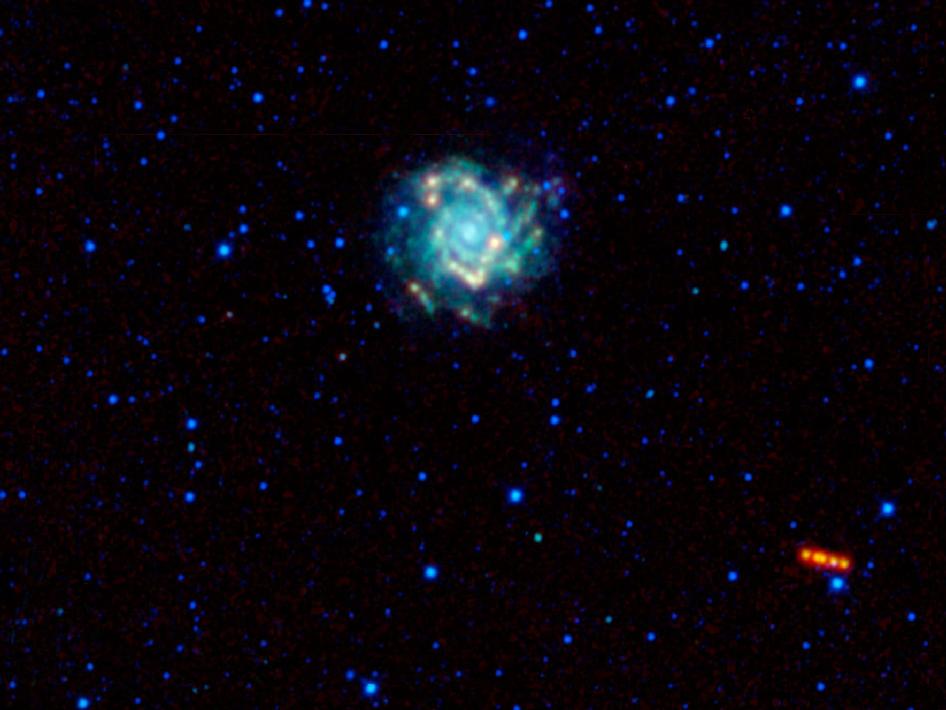 A Spiral Galaxy is Visited by a Trojan War Hero

It's a bird! It's a plane! Nope, it's an asteroid tracking its way across the sky with a beautiful spiral galaxy in the background. In the center of this new mosaic image captured by NASA's Wide-field Infrared Survey Explorer (WISE) is the galaxy Messier 74, with its spiral arms seen face-on. The bright reddish object moving across the lower right part of the image is the much closer asteroid 3540 Protesilaos, seen at different points in its orbit around the sun. WISE observed and detected this previously known asteroid a total of ten times, although only a few of those frames were used in this mosaic.

Also known as NGC 628, the Messier 74 galaxy is between 24.5 and 36 million light-years away, and has a diameter of about 100,000 light-years. It is suspected to have a black hole at its center, with a mass equal to 10,000 suns. It is one of only a handful of known black holes with masses intermediate between the relatively smaller ones that form from collapsing stars and the supermassive black holes millions of times more massive than the sun, which are more typically found at the centers of galaxies. Although it is called a Messier object, Messier 74 was actually discovered by Pierre Mechain in 1780, who then told his friend Charles Messier about it. As one of the dimmest of all Messier objects, this galaxy is a challenge for amateur astronomers to see in visible light, but the WISE cameras captured it clearly in infrared light.

The colors used in this image represent different wavelengths of infrared radiation. Blue and cyan represent light at 3.4 and 4.6 microns, respectively. These colors show both nearby stars inside the Milky Way galaxy and the combined light of billions of stars that make up Messier 74. Green and red represent light from 12 and 22 microns, respectively. These colors show light from cooler objects and material. Dust in star-forming regions in Messier 74 traces its spiral structure. The coolest object in the picture is the asteroid 3540 Protesilaos.

This asteroid was first seen in 1973 by the German astronomer Freimut Börngen, who discovered more than 500 asteroids while he was researching galaxies. At the time that WISE observed 3540 Protesilaos, it was at a distance of 772 million kilometers from Earth (480 million miles, or about 43 light-minutes). It is classified as a Jupiter Trojan minor planet, which are small rocky bodies that share the same orbit around the sun as the planet Jupiter. Based on the infrared observations, the WISE team estimates the asteroid to be about 90 kilometers (56 miles) across and to reflect only a few percent of the light that lands on it, which makes it about as dark as coal.

By convention, Trojan asteroids are named after the heroes from the Trojan War. In this case, asteroid 3540 is named after the hero Protesilaos. According to Greek mythology, Protesilaos was the first Greek to set foot on Trojan land during the war. Unfortunately for him, there was a prophecy that the first soldier in the war to step onto land from a battle ship would die. The prophecy quickly came true and Protesilaos was killed.