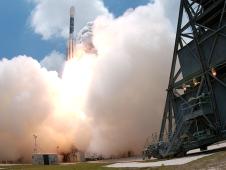 A Delta II like the one that will lift WISE launches.

The Wide-field Infrared Survey Explorer launched on-time Dec. 14, 2009, at 9:09 a.m EST from Vandenberg AFB, Calif., to begin its survey of space. The spacecraft uses a telescope designed to see light in the infrared wavelengths. NASA's Launch Services Program oversaw the liftoff aboard a Delta II rocket.

The NASA Launch Blog covered the countdown and launch in detail as the launch team readied the craft and gave it's "go" for launch before the Delta II left the pad. You can revisit the milestones as they occured on this coverage archive. You can also stay up-to-date on the findings of the WISE by checking the NASA Web site.

Note: All times are given in Eastern time unless otherwise noted.

NASA's Launch Blog is closing after this morning's flawless launch of the WISE space telescope aboard a Delta II rocket from Vandenberg Air Force Base, Calif. The observatory will go through a one-month checkout session before it begins scanning all of space for asteroids, failed stars and distant ultra-luminous galaxies, all of which can be seen in the infrared wavelengths that are invisible to other telescopes. You can continue to follow the mission's progress on NASA's Web site.

The cooling vents on the WISE spacecraft have opened as planned. The telescope is extremely sensitive to any heat, so it has a carefully designed and calibrated cryostat loaded with solid hydrogen to keep it cool. The spacecraft has also stabilized itself and is pointing its solar panel correctly to power its onboard systems.

WISE is flying on its own!

10:01 a.m. - Second Stage Burn Successful!
The Delta II second stage ignited and shut down on schedule. Next milestone: WISE separation in about 2 minutes.

WISE will not be the only infrared observatory in operation above Earth. NASA's Spitzer Space Telescope has been conducting very specific observations in infrared wavelengths since its launch in 2003. Europe and NASA cooperated on the Herschel Observatory, which was launched in May from French Guyana on an Ariane 5. Like Spitzer, it is designed to look closely at very small parts of the sky, whereas WISE is made to review all of space.

All systems on the WISE spacecraft remain in good condition. The next major milestone is the reignition of the second stage engine, scheduled to occur in about 15 minutes. The burn will last eight seconds. WISE will separate from the second stage soon after the burn ends.

WISE is not the first infrared space telescope, but it is far more advanced than previous spacecraft. It's most direct ancestor is the Infrared Astronomical Satellite, IRAS, which orbited in 1983 to assemble the first all-sky survey in infrared. The IRAS spacecraft used detectors with a resolution of 62 pixels, the WISE will use detectors with a 1 million-pixel resolution. So, the WISE scan will be conducted with instruments hundreds of times more sensitive than those flown more than two decades ago.

The first stage has burned out and the second stage has taken over. The payload fairing has separated from the rocket and WISE is exposed to space as it continues to rocket into orbit.

Three solid-fueled boosters known as GEMs burned out and fell away from the Delta II as planned. The rocket continues to build up speed and is now moving at about 1,780 mph.

The Delta II cleared the launch tower and is heading southwest over the Pacific Ocean. "Searching for stars and galaxies never seen before!"

WISE is one minute from beginning its flight into orbit.

The final phase of the countdown is under way and WISE is on schedule to climb into space with a liftoff at 9:09 a.m.

All members of the launch team report "go" for the first launch opportunity at 9:09 a.m.

At T-4 minutes, the countdown for WISE has entered its final planned hold before launch. The hold will last for 10 minutes, and the launch team will give its final "go for launch" before resuming the countdown. All remains on schedule for a 9:09 a.m. liftoff from Vandenberg aboard a Delta II rocket. Forecasters are watching for unacceptable cumulus or thick cloud conditions. The rocket and spacecraft are in good shape.

The countdown for the launch of the WISE spacecraft has picked up at the T-15 minute mark as scheduled. Forecasters still call for a 60 percent chance of acceptable conditions at launch time, which remains at 9:09 a.m.

As WISE looks out on the universe, it is expected to see dim asteroids, comets and failed stars, plus the very brightest of galaxies. Working during the course of 10 months (One for checkout and nine for surveys), WISE is expected to relay enough data for scientists to compose a complete picture of the entire universe as seen in infrared wavelengths. The findings will provide a catalog of objects for specialized studies by other telescopes including NASA's James Webb Space Telescope, the successor of NASA's Hubble Space Telescope.

The countdown has entered a planned hold at the T-15 minute point. This hold will last 20 minutes. There is one more hold in the countdown at T-4 minutes. Everything remains on schedule to launch at 9:09 a.m.

The first and second stage engines were remotely swiveled to the forward and back, left and right in a standard test procedure to make sure they will correctly steer WISE into its proper orbit. The first stage will produce 560,000 pounds of thrust, so it will not take much movement of the engine to change the rocket's course during launch.

The WISE spacecraft weighs 1,485 pounds and will orbit 326 miles above Earth. A 16-inch diameter telescope is the mission's main tool, while the rest of the spacecraft is engineered to point the telescope and transmit its findings to a ground station in New Mexico. A flat solar panel on one side of the spacecraft makes electricity from the sun to power the onboard systems.

The WISE instruments, designed to look for infrared light, are encased in 35 pounds of solid hydrogen to keep them at minus 429 degrees F. The chilled conditions will keep the spacecraft from picking up the heat signatures from its own systems as it scans the distant universe for faint objects.

The solid hydrogen is called a cryostat, and it is expected to last 10 months, long enough to conduct a spacecraft checkout and then one-and-a-half complete sky surveys. A survey takes six months and is composed of images WISE snaps every 11 seconds.

The launch team continues working toward a liftoff at 9:09 a.m. from Vandenberg Air Force Base in California. The launch window extends to 9:23 a.m.

The Wide-Field Infrared Survey Explorer sees the same universe as other telescopes, but in an entirely different way. Conventional telescopes, such as those sold in hobby shops, are geared to see visible light, which is the same light our human eyes see. But that is only one small part of the spectrum of light that exists in space. So researchers designed the WISE mission to see infrared light, which is light in the darker range of the spectrum.

That means WISE can pick out objects that are too dim to be seen by conventional observatories. Asteroids and comets near Earth are expected to be visible to WISE, as are distant failed stars known as brown dwarfs.

During its nine-month survey, the spacecraft's telescope and observing instruments are to take images every eight seconds and create a database of the entire sky as seen in infrared. That will give scientists one and a half maps to pore over looking for previously unseen objects.

Pumps at Space Launch Complex-2 are moving super-cold liquid oxygen into the first stage of the Delta II. Controllers are not working any technical issues as the countdown ticks on toward a liftoff at 9:09 a.m., the opening of the WISE launch window.

We are covering the countdown to the launch of the Wide-field Infrared Survey Explorer aboard a Delta II rocket from NASA's Space Launch Complex-2 at Vandenberg Air Force Base in California. Once in orbit, the spacecraft is designed to scan the sky with infrared sensors to find new asteroids, stars and galaxies.

The Delta II is one of the most reliable launchers ever built. It's far from the biggest booster available, but it has dispatched some of NASA's most successful missions, including the Mars rovers Spirit and Opportunity. The Delta II being prepared today is a two-stage version and it has three solid-fueled boosters attached to increase its strength at launch. The first stage of this rocket has one engine, which is fueled by refined kerosene and super-cold liquid oxygen.

The second stage also has a single engine, this one powered by two propellants that spontaneously burn when they come in contact with each other. Since the chemicals ignite themselves, designers did not need to add a complex and heavy ignition system to the upper stage. Apollo engineers followed the same principle when devising the service module engine that had to fire to send astronauts back to Earth from the moon.

The WISE spacecraft is at the top of the rocket with the payload fairing, or nose cone, bolted around it. The fairing protects the observatory from intense heating and aerodynamic buffeting during launch. The nose cone will split in two soon after the spacecraft enters the trace layers of atmosphere.

The WISE mission is going to orbit the Earth from north to south in what is known as a polar orbit because it basically crosses Earth's poles on each revolution. Cape Canaveral Air Force Station in Florida, the East Coast launch site for satellites, cannot host missions destined for polar orbit because the trajectory of such a launch would take the rocket over South America. From California, however, a rocket can reach polar orbit without traversing any heavily populated areas or major land masses on the way to space.

Meteorologists have detailed the forecast for this morning's launch window. Chances of violation have grown to 40 percent because of cumulus and thick clouds in the vicinity of the launch site. The launch window opens at 9:09.

Good morning and welcome to NASA's Launch Blog covering the launch of the Wide-field Infrared Survey Explorer, or WISE. Liftoff is scheduled for 9:09 a.m., which is the opening of the launch window. The spacecraft will fly into orbit aboard a Delta II rocket from Vandenberg Air Force Base on central California's Pacific coast.

A Delta II stands ready at Vandenberg Air Force Base to launch the WISE spacecraft into orbit. Our continuous coverage of the countdown begins at 7 a.m. for launch at 9:09 a.m.