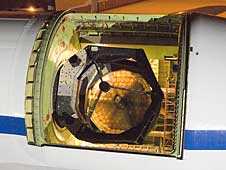 This backlit photo of SOFIA's infrared telescope during characterization testing shows the cell-like construction of the telescope's 2.5-meter primary mirror.   NASA Photo / Tom Tschida The Stratospheric Observatory for Infrared Astronomy, or SOFIA, telescope team collected baseline operational measurements during several nights of characterization testing in early March. For these Telescope Assembly Line Operations tests, the SOFIA 747SP aircraft that houses the German-built infrared telescope was parked on an unlit ramp next to its hangar at the NASA Dryden Aircraft Operations Facility in Palmdale, Calif. The primary celestial target was Polaris, the North Star.

The telescope's last baseline measurements were taken in Waco, Texas, in August 2004, shortly after the instrument was installed in the aircraft.

In addition to establishing a functional baseline for operation of the telescope's control systems, the team of German and U.S. scientists and telescope operators evaluated the graphical user interface that will be the main connection between the observatory operators and its control systems. This checkout and characterization activity also provided the participants with a working knowledge of how telescope operating systems interact and the experience of tracking celestial targets from the ground.

The data was gathered prior to the mid-April removal of the telescope's primary mirror assembly. After removal, the mirror will be sent to NASA's Ames Research Center, Moffett Field, Calif., for coating. The assembly will be re-installed in the SOFIA aircraft in mid-August. 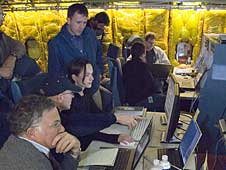 Scientists and telescope operators focus on data readouts set up inside NASA's SOFIA airborne observatory during telescope characterization tracking tests.   NASA Photo / Tom Tschida NASA's Stratospheric Observatory for Infrared Astronomy (SOFIA) is being developed as a world-class observatory complementing the Hubble Space Telescope. The observatory features a German-built 98.4-inch (2.5 meter) diameter infrared telescope weighing 20 metric tons mounted in a highly-modified Boeing 747SP aircraft. Once operational in the 2009-2010 period, SOFIA will be the world's primary infrared observatory during a mission lasting up to 20 years, as well as an outstanding laboratory for developing and testing instrumentation and detector technology.

Systems integration and flight test operations are being conducted at NASA's Dryden Flight Resarch Center at Edwards Air Force Base, Calif. SOFIA's science and mission operations are managed jointly by the Universities Space Research Association (USRA) and the Deutsches SOFIA Institut (DSI), and are based at NASA's Ames Research Center at Moffett Field near San Jose, Calif.