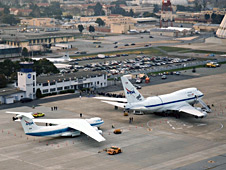 The now-retired Kuiper Airborne Observatory and its successor, the Stratospheric Observatory for Infrared Astronomy, are lined up on the ramp at NASA Ames Research Center during SOFIA's visit to Ames on Jan. 14, 2008.   NASA photo / Eric James SOFIA Status Update, 1-15-08:
After a brief visit to NASA Ames Research Center at Moffett Field near San Jose, Calif., NASA's Stratospheric Observatory for Infrared Astronomy has arrived at its permanent base of flight operations in Palmdale, Calif.

During the one-day visit to NASA Ames Jan. 14, Ames employees, family members and news media representatives had the opportunity to see the highly modified Boeing 747SP with the German-built 2.5-meter (98.4-inch) infrared telescope installed in its rear fuselage. After tours of the aircraft and interviews of project scientists by San Francisco Bay Area news media, several thousand Ames employees and their families had the opportunity to tour the SOFIA during an open house that stretched well into the evening.

Following the visit to Ames, the SOFIA flew to the newly established Dryden Aircraft Operations Facility operated by NASA's Dryden Flight Research Center in Palmdale, Calif., where it will be based during additional development, flight testing and its operational lifetime. SOFIA science and mission operations will continue to be managed by NASA Ames.

The SOFIA recently completed its first phase of flight testing that confirmed the structural integrity and performance of the modified Boeing 747SP while carrying the SOFIA's 37,500-lb. infrared telescope assembly. The tests verified the flight performance of the highly modified aircraft with the telescope's external cavity door closed, including aerodynamics, structural loads, handling qualities, stability and control and validation of operating systems. Additionally, ability of the telescope assembly's control system to maintain exact tracking of a celestial object while the aircraft is traveling and maneuvering was checked out during the last flight in the series in late December, 2007. 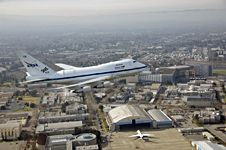 NASA's SOFIA flying observatory makes a low pass over NASA Ames Research Center prior to landing at Moffett Field for a brief visit on Jan. 14, 2008.   NASA photo / Carla Thomas Over the next nine to 10 months, the SOFIA will undergo major telescope subsystems installation and integration in preparation for the next phase of flight tests with the telescope's external cavity door open, scheduled to begin in late 2008. "First light" astronomical science data is expected to be obtained with the telescope in early 2009, and regular astronomy observation missions are planned to begin with five specialized instruments in 2011, leading to full operational capability in about 2014.

The current integration and checkout work and future flight tests are intended to verify that the unique airborne observatory is ready to perform its planned astronomical science mission over its expected 20-year lifetime. Cruising above more than 99 percent of the atmospheric water vapor at 41,000 to 45,000 feet altitude, the SOFIA will enable astronomical observations that Earth-based telescopes cannot equal.