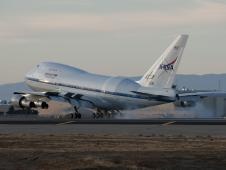 NASA's Stratospheric Observatory for Infrared Astronomy 747SP lands at Air Force Plant 42 in Palmdale, Calif., following a test flight on Dec. 9, 2009. The mission included the first opening of the observatory's external door that covers the large telescope cavity. (NASA Photo / Tony Landis) NASA's Stratospheric Observatory for Infrared Astronomy, or SOFIA, marked another step toward beginning operational space science missions Dec. 14 when both the external and internal telescope cavity doors were opened during a test flight near Edwards Air Force Base.

On Monday's mission, test engineers opened both telescope cavity doors on the highly modified Boeing 747SP to 10 percent of their maximum range to evaluate the effects of airflow on the structural integrity of the telescope, the cavity and the airframe.

SOFIA test pilot Troy Asher reported that the first opening of the doors had little or no noticeable effect on the controllability or handling qualities of the heavily modified aircraft, although they noticed a low-frequency hum reverberating through the converted jetliner.

The SOFIA aircraft was aloft for 3½ hours during the flight, just five days after conducting a check flight Dec. 9. That flight had seen the rigid external telescope cavity door opened for the first time in flight, although the lower flexible door that covers the telescope itself remained closed.

A follow-on flight to fully open the two doors using the cavity door drive system to expose the telescope, a major milestone for the SOFIA development program, is scheduled in the near future. During both test flights, the telescope's primary mirror remains covered to protect it from any unexpected debris. SOFIA's test missions are conducted in restricted test airspace near NASA's Dryden Flight Research Center on Edwards Air Force Base.