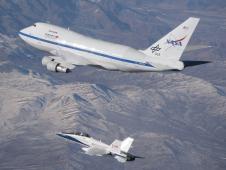 This check flight evaluated the aircraft's performance, handling characteristics and flight systems. The flight included a check-out of aircraft systems, including engines, flight controls and communication. The cavity door drive system, the mechanism that controls the doors covering the telescope cavity, was operated without exposing the telescope.

The next flight planned for later this month will include opening of the telescope cavity door to 10 percent of its range. That will be followed by a flight to operate the cavity door drive system to open the upper rigid door completely to expose the covered telescope mirror.

The aircraft and telescope have undergone significant modifications and upgrades since its last flight, including:
While the aircraft was undergoing maintenance at NASA’s Dryden Aircraft Operations Facility in Palmdale, Calif., three nighttime telescope operational checkouts were conducted with several of SOFIA's unique instruments, including the Focal Plane Imager, the High-speed Imaging Photometer for Occultations and the Fast Diagnostic Camera.